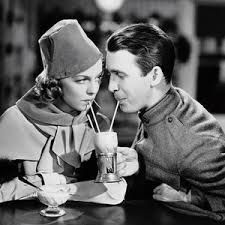 This is a movie that teetered on the brink of boring us. The production values were pretty low rent, the sentimentality overwhelming at times but the acting chops of Stewart and Sullavan (and Walter Pigeon) saved it in the end. The story is a Broadway star is sucked into entertaining a solider on the night before he ships out. Her ennui is palpable but his sincerity and innocence wins her over. Hattie McDaniels plays her maid. (Did she ever play anything else?) Stolid and not solid direction didn't help this. But there was an earlier version so I guess familiarity breeds content and not contempt sometimes. Rumor has it that Stewart and Sullivan had something going at the time and that may have helped light up the screen.
Posted by pattinase (abbott) at 5:00 AM

Interesting, Patti. I have to confess, this is one I'd not heard of before. Interesting how acting and chemistry can save a film, even if it's not brilliantly made.

Hattie McDaniel, not MacDonald
Margaret Sullavan, not Sullivan (a mistake I've made many times

There were two earlier silent movie versions of this, according to Wikipedia.

Sullavan played opposite Stewart most famously in THE SHOP AROUND THE CORNER. Also in THE MORTAL STORM. I've seen those (more than once), but never this one.

THE SHOP is infinitely better.

I really like that one. Definitely one of Sullavan's most appealing performances.

And made into YOU GOT MAIL with some success.

I haven't seen it either, though I have sen SHOP AROUND THE CORNER.

I doubt many have seen it. It is on FILMSTRUCK if you have it.

Never heard of this. I saw the photo and cast and thought you got the title wrong. HA! Joke's on my uninformed (ignorant) self. SHOP AROUND THE CORNER (marvelous movie infinitely better than the Hanks/Ryan remake) was 1940, two years after SHOPWORN ANGEL.