Very early on, before I was properly writing crime stories, Ed Gorman reached out to me through my blog, offering encouragement and eventually a spot in two or three of his yearly anthologies. He wrote reviews of forgotten books most weeks, he sent me several of his books that he thought I would like. I think he shared this sort of relationship with many, many people. He offered to feature my books on his blog. In other words, a man who hadn't much time-- made time for a fledgling writer. I will miss him every day because I regard the people who write for FFB as my family. We never met in person but that's not really necessary any more.  Now here are some other words. 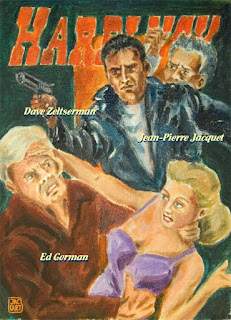 I suspect dozens of other writers are going to be writing similar tributes as mine, and 10000s of readers are going to feel the same way about Ed as a writer as I did. That was because as a person, Ed was one of those rare people who’d go out of his way to help you, and he was just such a damn nice guy, and as a writer not only did he craft  beautiful prose but he filled his stories with a such unique human quality no matter how dark the story. Ed was proud to be a genre writer, and excelled at it in all genres that he wrote: Westerns, mysteries, thrillers, and horror, and both short stories and novels. I don't know if this was much of a secret but Ed didn't much care for literary 'artiste' types. To Ed, the point of writing was to tell exciting stories that drew the reader in, and few did it better than Ed. Partly because of Ed's love of these genres, and partly because of his overall decency, there are few out there who championed newer writers like Ed did.


I never got a chance to meet Ed in person, and during the 15 years that I knew Ed we only talked a few times over the phone, but during those years we exchanged 1000s of emails over just about everything: books, politics, movies, television, the state of publishing, what was going on with our lives, Orson Welles, you name it, and just as Ed’s strong humanist qualities and decency came through in his writing, they likewise did with his emails. Just a great guy. And a great writer. That’s the easiest way to sum Ed up. Someone you can love like an older brother even though you never met him. Someone who’s passing makes the world just that much colder.

Ed, rest in the peace you so much deserved. Like everyone else, I don’t know if there’s anything after this life, but if there is, I’d like to think you’re right now with your buddies Tom Piccirilli and Marty Greenberg, hanging out with Hammett, Stout,  Cain, and the other greats trading stories.

What a powerful couple of stories, Patti. And I think it's a great idea to have an Ed Gorman Day. He was such an influence for a lot of people.

Great tribute Patti, thanks for taking the time.

Glad you're doing this, Patti.

It's always been my personal opinion, which I did tell Ed, that the best of his work (and a lot was very, very good) was in his short stories. For those of you who, unlike me, do not regularly read them, go to the library or Amazon at any of his many collections. The atmosphere, the writing, the sense of melancholy, everything that provides a mood in a short space, he was a master. He was up in my top 5 favorite short story writers.

I also liked his Robert Payne books, especially the first, and his westerns, which were not like anyone else's.

He will be sorely missed.

Enjoyed reading these tributes, Patti. I wish I were more familiar with Ed Gorman's work, but at least I can say that I am not a complete ignoramus. I have read Ed's Sam McCain series since the first book, WAKE-UP LITTLE SUSIE (all the titles in the series are rock n' roll song titles which is the first thing that caught my eye) and loved them. And I believe I reviewed one or two on my blog, though Google now prohibits me from finding my past posts unless I go post by post by post by post back into the mists of time.(I hope they're planning to fix that.)

I decided to write another short piece about Ed for The Rap Sheet, to commemorate what would have been his 75th birthday. I hope you can add it to your links:

I'm so glad you're doing this, Patti.

Actually, WAKE UP LITTLE SUSIE is the second book in the Sam McCain series. The first title was THE DAY THE MUSIC DIED. Sorry for the mix-up.

Patti, this is an incredible gathering of tributes to Ed Gorman. I especially am enjoying learning about his writing of Westerns and other genres I don't normally read.

I have no tribute but did pick up a copy of STRANGLEHOLD to read.

You guys have got me weepy again. As Sam McCain I would never, never admit such a thing...but I'm not Sam right now. Come to think of it, Sam's feeling pretty down too at the moment. As are we all.

Among my Ed reviews:
http://socialistjazz.blogspot.com/2012/09/ffb-some-suspense-fiction-anthologies.html
for the brilliant BLACK LIZARD ANTHOLOGY OF CRIME FICTION and its sequel.

And this, with Ed's sapient and gracious comment:
http://socialistjazz.blogspot.com/2009/08/crime-fiction-best-of-years.html

And thanks, Patti, for calling for this, and everyone for participating/sharing.

A wonderful tribute, Patti. Thanks from me as well.

I'm sorry I somehow missed knowing this Ed Gorman Day was occcuring, though other than having read his blog and the first three McCaine books and some short stories I had no contact. It seems he was a very, very nice guy, and he greatly missed. Thank you, Patti, for putting together these links.

Ed Gorman was one of the finest writers and one of the most decent people int he writing community. Although we never met, he was always helpful to me and to any other newbie who came on his radar screen. He is greatly missed and remains in my daily prayers.

So enjoying reading through these stories. Ed Gorman certainly touched a lot of lives.

I didn't know him well enough, and I'm really enjoying these tributes. What a great way to celebrate him as a person. So sorry for everyone's loss.

Thank you, Patti and everyone, for your tribute to Ed.

I just wrote something on my blog, late but in under the wire.

My blog address didn't make it through. capnbob.blogspot.com

Ed was the best of the best and remains so in my memory. I think of him every day and how fortunate I was to know him.

I think we all feel that way, Bob. He was the best.