How I Came to Write This Book; DANA KING, A DANGEROUS LESSON 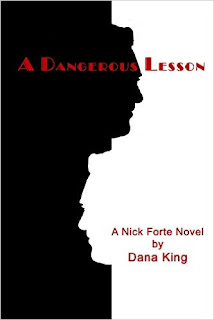 First, thanks to Patti for this opportunity. She’s been such a positive influence on my writing and attitude toward it I’m always flattered when she gives me her little corner of the Internet for a few minutes.

A Dangerous Lesson is officially the fourth book of my Nick Forte series, though the key idea comes from my first attempt to write a novel. It was a Forte story—the character pre-dates any thoughts I had of publication—with what I thought was an interesting twist. A well-known psychiatrist created a revolutionary treatment for drug abusers that relies heavily on hypnosis. The doctor kills his mistress and hypnotizes one of his patients into thinking he did it while under the influence of drugs, going so far as to leave the kid, stoned and passed out, in the vicinity of the victim’s home. I called the book Guilty Conscience. (Joe Clifford tells me it’s improper to italicize the titles of unpublished books.)

I haven’t look at Guilty Conscience in years, so I can’t say much about the caliber of writing it contains. That’s probably a mitzvah, given how much I’ve learned since then. I did like the story, and an agent showed at least some interest.

I still had faint hopes something might come of it when things fell apart between my second wife and me and divorce proceedings began. Among her laundry list of requests was 10% of anything I ever made from Guilty Conscience. This struck me as a bit much, as her entire contribution to the book was to mention there was no terrain in Chicago where one scene could have taken place, and that the top cop is the superintendent and not the commissioner. (Or the other way round.) This led to the easiest negotiation of the settlement: I told my lawyer to get something in return, we agreed to the 10%, and I resolved never to look at the book again. So there.

The idea of planting memories stuck with me. Several years later I was noodling around on the Internet and came across Dr. Elizabeth Loftus, who was teaching at Cal Irvine and considered the leading authority on the effects of hypnosis on memory. A bit of a controversial figure, she raised a counterargument to the use of detecting past child abuse by showing memories could as easily be created as recalled.

On the faculty of a state university, her email was public record, so I pinged her. A few messages back and forth resulted in a phone call that she began with a warning of how little time she had and lasted almost an hour. She was enormously helpful and provided ideas I would never have thought of while cautioning me not to make too much of some things. Not to say I did everything exactly as she suggested, but that’s what novelists do: use facts to make shit up.

So A Dangerous Lesson is what grew from the rotting corpse of Guilty Conscience. I buried the idea, gave it a little light and water from time to time, and an entirely new and different story grew from the same seed. One I own completely.

I do miss that title, though.
Posted by pattinase (abbott) at 12:00 PM

This is really interesting. I find it fascinating to see how our own experiences and, sometimes, just curiosity, inspire writing. Thanks for sharing.