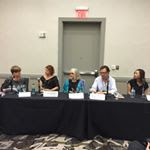 Bad picture of my panel, which I think went well. I was lucky enough to have four panelists who were chatty but not greedy: Laura Caldwell, Edith Maxwell, Rory Flynn (Stona Fitch) and Steph Cha. They were smart and it was a  pleasure talking to them,
We talked about crime in the metropolis to a crowd of about 50. Certainly not a huge draw but I attended ones with fewer people. Thanks to Jeff and Jackie, George, Jeff Pierce, and the Agnews from Aunt Agatha's in Ann Arbor, Phil Abbott, Fred Zackel, Jen Conley, Megan, Richard Moore and some people I didn't know. And probably a few I am forgetting. It was kind of a blur.

I attended two panels with Megan on them right after mine, and maybe about four others. Megan's panel with Bill Crider, Lawrence Block, Karen Slaughter and question-asker Mark Coggin was a lot of fun. That panel must have had 300 people.

I didn't do all that much of the conference thing-I spent my time mostly with the Meyersons, George and a few others. George was right. The book room was a bust. When I think back to my first Bouchercon in 2006, the difference is amazing. So many cool book sellers at that one. Here is was almost entirely panelists' books.

Raleigh had good food but not much else. There are almost no stores, no movies-so for once coming back to Detroit wasn't so bad. I should have done better with meeting new people or looking for old ones but a bad knee and allergy maladies kept me under the weather. Also our hotel was poorly placed although next door to two great restaurants.

I guess I will never be good at this sort of thing. Which is why I sit in a room and write. Online I am gregarious and with people I know and trust too. But put me in a room with hundreds of people and I falter. Sorry if I could have met you and didn't. I know you would have been wonderful.
Posted by pattinase (abbott) at 5:00 AM

We enjoyed our time and dinners with you and Phil.

See you in the Spring.

Your panel on Metropolitan crime was informative and lively. I think your moderation was a key factor in keeping things moving. Many panels get bogged down. I'm not a crowd person myself. But hanging out with you and Phil, the Meyersons, Bill Crider, and other friends make BOUCHERCON fun for me. See you in New Orleans!

I'm sure you did wonderfully. I definitely want to make this con sometimes. Disappointing to hear about the book room though

I'll bet you did a fantastic job, Patti! Wish I could've been there.

I'm sure your panel was great. Not everyone is or wants to be a gladhander. I have a difficult time with crowds sometimes too.

I figure a lousy book room is the fault of the con organizers. They can invite whomever they want.

And yet... it sounds as if you had a swell time. Thanks for sharing your experiences.

The book room at LCC in Portland was so bad the Maytag Repairman hung around there.

I'm a wallflower among crowds of strangers, too.

I totally sympathize about speaking in front of a group or even being in crowds of people. I avoid both situations. But I do envy you being able to attend Bouchercon. I have a Steph Cha book to read.

She was very smart and very nice. And spoke so interestingly about the problems of Korean-Americans turning up in crime fiction as more than a buddy.

I wonder if most writers are, Bob.

I've been asked to come a few times and I'm afraid I'd be at a loss for many of the reasons you mentioned.