I don't watch many films from 1931 but this one was quite amazing in several ways. A pre-code film, it was preoccupied with Stanwyck and fellow nurse, Joan Blondell changing into and out of their uniforms for one thing. There-- with that item out of the way, I can talk a bit about the story. 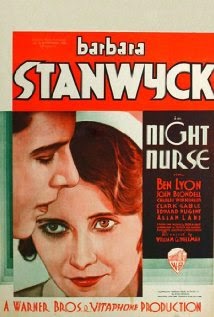 Barbara Stanwyck is studying to be a nurse in a hospital. We go through her probationary period when she is introduced to two young sisters who appear to be wasting away.  On graduation, she and Joan Blondell are assigned to care for the sisters at home. Their home is a scene for unending parties, drunken people, and a very nasty chauffeur (Clark Gable). Everyone seems callous to the suffering going on by the girls and in fact, a third sister was run over by Gable!!

There are so many odd things about this film it's hard to know where to start. And  yet, it keeps your attention. Gable mainly is there to punch people, including Stanwyck. Ben Lyons plays a mobster hero and the efficacy of a milk bath is called into question. Only 70 minutes long, see it if you want to alternately laugh and shriek in terror. A real horror film.

I've never seen NIGHT NURSE but now I want to after reading your fine review! I'll track it down.

Patti - I have to say, I've never seen this one either. Still, it sounds like fun. I ought to check it out.

Back in the 1980s I was watching almost any movie if it was:

I definitely saw this one for the cast alone. I've always loved Joan Blondell (THREE MEN ON A HORSE was a favorite). Plus, I tried to see as many pre-Code movies as I could find.

And the cheesecake daring of this film is certainly put in perspective by the nudity through the century+ clips that the trailer links to at its end, from Méliès through the cheerless hypocrisy of "These Girls Are Fools" to buxom young women body-painting (I imagine the liquid latex might be uncomfortable in certain spots).

This is one of those films I've landed on in progress from time to time, and really should see through, given I like the cast and the sound of it, too...perfervid ruled OK with a whole lot of pre-code, and not a few post-code, films...

Wow! I was waiting for the thwaka-thwaka background music. And that sleazy intern just back from the delivery room--shudders!

Love this movie - saw it on a double bill with BABY FACE and they are two of my favourite Pre Code excurdions - also available on very good DVDs from Warner.

Oh My Goodness. This sounds a treat, Patti. Gable as a bad guy chauffeur punching and running over women. Will wonders never cease? Ha.

I'm surprised he didn't buy up all the copies of this one once he became a big star. :)