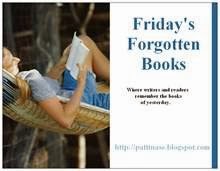 This is hardly a forgotten book but I was reminded of it a few days ago when I caught part of the movie on TCM. I have read it several times, seen the movie more than once, and even saw the play version in Stratford in Ontario. I am constantly amazed at just how complex a story it is. It deals with the power of a teacher to influence and what happens if that influence is corrupting.

The story begins as a group of new girls come under Jean Brodie's influence at a school in Edinburgh. She is in her "prime" she tells them and is intent on making this group her special girls. Certainly she exposes them to a lot of literary and historical influences that are admirable but she is also a fascist, a true one, who admires Franco in Spain. She also sets various other plots into motion. As the girls grow up, one sees the danger in her influence, on how she chooses girls that are somewhat alone in the world and those susceptible to her tutelage-much like a man seeking sex with young girls might do. (In fact, she sets one of them up with a male teacher). The girl informs the headmistress of one particularly heinous act and brings her down. She betrays her yes, but sometimes one must.

A great book by a great writer.

Have not read it but it sounds interesting!

I thought in 2014 I'd get on top of this Friday's Forgotten Book ritual. But I'm still a straggler. Mine's up now, Patti:

The Man in the Moonlight by Helen McCloy

please add my link, thanks.

The Prime of Miss Jean Brodie is indeed a great book, which makes me feel sort of stupid for not having read anything else by Muriel Spark.

Brian...THE GO-AWAY BIRD, among other Sparks I've reviewed, and so many I haven't. THE COMPLETE STORIES, certainly.

Patti and everyone, I quick gloss on one book I've done for before, and one which Rick inspired me to finally get through a gift...ah but for the luxury of time and energy...

FFB: Walt Kelly: The Life And Art of the Creator of Pogo by Thomas Andrae and Carsten Laqua (Hermes Press 2012); The Art of Jaime Hernandez: The Secrets of Life and Death by Todd Hignite (Harry N. Abrams 2010)

Her shorts are terrific as well as the novels I have read.

Having been a teacher, I think I can say that the profession attracts certain people who should not be around impressionable youth.

Terrific book indeed, and I loved the movie when we first saw it. I rewatched it a couple of years ago. I still love Maggie Smith. The man she set up the girl with was played by her husband at the time, Robert Stephens, who she beat the crap out of and divorced after she caught him in an affair with Antonia Fraser.

I agree on Sparks's stories. I'd also recommend (great period details) THE GIRLS OF SLENDER MEANS. I also liked A FAR CRY FROM KENSINGTON.

Yes! Both are terrific, Jeff. She could write (can?).

The Public Image
The Go-Away Bird

Her autobiography, Curriculum Vitae, is also very good. My favorite of her fiction is A Far Cry from Kensington.

I've seen the movie and the play, and have also read the play, but never the book. That's the opposite of how I usually do things.

I have some forgotten books to cover soon, I swear.

PRIME OF MISS JEAN BRODIE is really a great book.

So too some of those recommend (FAR CRY FROM KENSINGTON, GIRLS OF SLENDER MEANS). Haven't read THE GO-AWAY BIRD (which is short stories, I guess).

MEMENTO MORI is also great, and LOITERING WITH INTENT.

She's one of the best.