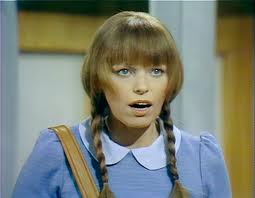 MARY HARTMAN, MARY HARTMAN was one of the oddest shows to ever capture the nation's imagination--and not for very long. It was a nightly soap opera that ran in 1976-77 about the trials and tribulations of an American housewife named Mary Hartman. It was tongue in cheek, of course, as Louise Lasser (Mary ) ran around with her hair in pigtails, suffering from the antics of her husband, mother, sister and friend. Much was made of her determination to get her kitchen floor clean.

It was aired late at night because it was somewhat controversial in its themes although daytime soaps seemed similar if less direct to me. The second season found Mary in a mental hospital and the show morphed for a time into FOREVER FERNWOOD and FERNDALE TONIGHT, the name of the town where it took place. Some amusing moments over the weeks it played. But too goofy to last long.
Posted by pattinase (abbott) at 7:00 AM

Patti - Oh, I remember watching this show! It was quite daring and innovative at the time. I remember liking it a lot.

We watched this one, and it had some good moments. Never missed Fernwood 2 Night, though. That's an all-time favorite.

Believe it or not I watched several episodes of this in 80s dubbed into Italian which was not ideal I grant you ...

I bet it did not translate well at all.

I loved this show. Mary was always overwhelmed because she was the only one who understood what was really going on.

We watched it too. Some classic stuff in there, especially Mary Kay Place as Loretta Haggers.

That's right. She did overhear everything. Mary Kay Place was terrific, wasn't she. And went on to some other good roles, which Lasser did not so much.

Lasser was drugging herself into oblivion at the time, sadly. Some of that overwhelmed attitude might've been all too real.

Not every city ran it in late-night...some did have stations that tried it, at least in next day repeats, in the afternoons, too...

The next Norman Lear soap, ALL THAT GLITTERS, was considerably less successful...FERNWOOD 2-NITE/AMERICA 2-NITE was considerably more influential, and definitely tended to be a late-night offer...

"But too goofy to last long" is the perfect critique of MARY HARTMAN, MARY HARTMAN. I watched a couple of episodes but quickly lost interest.

Since nobody else mentioned this ...

Mary Hartman was the show that made Dabney Coleman a star.
Before MH2, Coleman was always a "third-through-the-door" supporting actor, wiping up after the lead or the guest star.
The part of Merle Jeeter, evangelist/con man, was Coleman's ticket out of support; his underplaying made a comedy villain into something almost lovable - and set his career path forthwith.

I've heard of this, of course, but I've never seen an episode. In fact, I don't know that I've really even seen snippets of it.

Good point, Mike. Nine to Five probably came out of this role.

If you look on youtube they have Mary Kay Place singing "Baby Boy" from the show.

She won an Emmy Award for her work as Loretta, and was later nominated for a Grammy Award for her spin-off musical album Tonite! At the Capri Lounge Loretta Haggers. Place wrote two of the songs on Tonite!: “Vitamin L” and “Baby Boy,” both of which she sang on the program as Loretta.

I actually bought the album at the time.

For some reason, my only memory of this show had to do with Lasser's drug addiction. Her connection with Woody Allen figured in there, too... Wasn't there also a satiric nighttime soap back then where the male and female roles were reversed?

SOAP? Have to let Todd answer this one

I never saw the show but I remember the long-ish Carol Burnett sketch very well.

I'm with Bill on the kudos for Fernwood 2 Nite. Loved that show. And yes, Mary Kay Place rocks.

Todd Mason said...
This comment has been removed by the author.
3:58 PM

I have already answered Ron's question...ALL THAT GLITTERS was an sf soap opera about machinations in a company in an otherwise essentially identical world in which women had the upper hand in American society generally, and men were expected to be subsidiary if not submissive...matriarchal society. Might even have helped spark the genesis of my short story "Bonobos" decades later...

This one got by me, Todd.

Another forgotten but interesting oddity: All That Glitters repelete with mass gender role reversal . . .

Oooh, I did a post on MARY HARTMAN, MARY HARTMAN too, Patti. A couple of months ago. I loved that show. It was SO weird.
But weird in a good way...I think.

The main line I will always remember:

Loved it when it first aired! But it so tied to its era. I tried to watch it a few years ago on DVD and it lost all of it's original spark. Seemed very, very tame. Many of the early episodes duplicated the horrid 70s acting style of 70s soap operas which had DEADLY pacing and drawn out pauses that you could run an Amtrak train though. This is part of what makes it dull to me.

SOAP, on the other hand, I catch every now and then on Antenna TV and it still has a few shocking moments and is very, very funny.

More info on All That Glitters: Barbara Baxley was a corporate tycoon and two "hunky 70s"(with feathered hair) guys as her male secretaries. Gary Sandy who would later star in WRKP in Cincinnati was one of them. The other guy I remember was Wesley Parker. Other cast members were Anita Gillette, Jessica Walter and Lois Nettleton. I thought it was even better than MH,MH. (BTW - all of this is from memory)

That one completely got by me.
I can well imagine it lost its charm. Few shows seem to hold on to it.

Watched it all the time, but remember very little. However, I occasionally find myself thinking about the words "Mary Hartman, Mary Hartman" for no logical reason. At least I don't say them out loud.