Next week is Donald Westlake week on forgotten books, so be there or be square.

Ed Gorman writes the Sam McCann series and the Dev Conrad series. You can find his stories in ebooks from the TOP SUSPENSE GROUP too along with Bill Crider and James Reasoner. 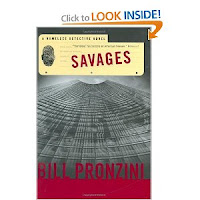 F. Paul Wilson once noted that private eye fiction offers the reader a snapshot of a certain time and place. We read Raymond Chandler not only for his fine prose but also for his portraits of Hollywood in the Thirties and Forties. Ross Macdonald showed us a very different Los Angeles due to the differences in time and temperament. And if you want to know what it was like on the angry lower-class streets of Depression Hollywoodland, you could do worse than read a lesser writer named John K. Butler, whose hardboiled cab driver functioned as a private eye without a license.

Today the definitive takes on San Francisco and environs are the Nameless novels and stories by Bill Pronzini. The influence here, if there is a singuar one, would be Hammett and not Chandler. Nameless is working class, competent and only occasionally up for doing the kind of favors that the more romantic Marlowe did so often. Nameless, like the Contintental Op, is a professional not a dashing knight.

A few decades from now the Nameless books will give readers a fascinating look at the past thirty-forty years of life in San Francisco. The social upheavels, the econmically and culturally stratified society, the endless experiments in modern living.

And you can find all this and much more in the Nameless novel SAVAGES. Pronzini tells three stories here. He goes back to work for a wealthy client he never much liked only after she convinces him that there's at least a possibility that her sister was murdered by her husband, a man Nameless couldn't turn anything sinister about when he first investigated him. Nameless not only comes to suspect the husband but several other people who were in the life of the dead woman. He draws these characters with clear and deserved contempt.

The second story deals with an arsonist pursued by Jake Runyon, the partner in Nameless' agency. The trail leads him to a small town where the feel is that of a western town of a hundred years ago. Pronzini, writer of many fine westerns, seems especially at home here with the good lawman and the bad lawman and the townspeople eager to get stampeded into believing any piece of gossip they hear. Interesting that he mixes this sensibility with that of young people into drugs, violence and MTV ennui.

The third story concerns Nameless' woman Kerry and the aftermath of her surgery for breast cancer. She's been pronounced all right but nobody who's had cancer ever quite believes that. Pronzini is especially adept at dealing realistically and unsentimentally with the subject.

Thus we encounter three kinds of savages here--those of the city elite--those of rural blue collar life--and those of the human body, the cancer cells that destroy without fear or favor.

Another excellent entry in one of the most consistently excellent series of the past forty years.

Sideswipe, Charles Willeford- The Hoke Mosley series by Willeford is one of my favorite in crimedom. Somehow he is able to combine great humor, an interesting story and fantastic characters without missing 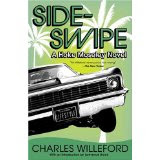 Sideswipe is the third book in the series and in this one, Hoke is coming off a nervous breakdown, two daughters who want to quit high school, and a very pregnant, unmarried partner who needs his help. A move away from Miami to a position in hotel management seems like a good idea until a psychopathic career criminal named Troy Louden comes to stay there, bringing along his makeshift gang. This brings Hoke out of his retirement. If you need a laugh, Willeford will supply it.

I have been meaning to go back to Willeford's books. Maybe this will get me moving.

I am also a huge fan of Willeford's Hoke Moseley series and wish he'd lived to write more.

I am saving the last one.

I don't have Savages but I will look for it now.

Patti, thanks for including me, once again, in this weekly listing and I promise that one of these days I will actually submit a review on a Friday! :)

But just out of curiosity, why did you pick a review from last Monday, of a popular and contemporary novel that will be released in paperback later this month, when I posted a review of a truly forgotten book only yesterday: Bertus Aafjes' A Lantern for the Blind.

I generally look for books from people that don't do them per se earlier in the week. It gets too hectic on Friday morning to look at so many places and I was away yesterday. I will change the link though.

Also TomCat-I am never able to read your blog because the print is so small. Sometimes I am not sure if the title I put on the summing up is even correct. Your eyesight and mine must be at opposite ends of the spectrum.

Patti, I will look into that problem and perhaps adjust the font size from there on out, however, I don't have the time to go back in the archives to adjust them all.

However, you can still read them, if you want, by simply adjusting the font size in your browser. Most of them have that option. Another option is to copy/paste my review into a word processor program (like microsoft words or openoffice), adjust the size and read on there.

Anyway, I will see what I can do for you.

Proof reading comments: not as easy as it may look!

If no one else has the problem, you shouldn't make a change. I sit in the last row in movie theaters after all. You do have interesting reviews and I like to read them. I can easily cut and paste it.

THE LAST DRAGONSLAYER by Jasper Fforde, for the And for Scott Cupp...

and Karyn Reeves did some Ngaio Marsh:

It's worth noting (or at least fun to note, in terms of Willeford arcana) that Willeford cannibalized a much earlier (and then-forgotten book), "No Experience Necessary" (1962) for parts of "Sideswipe."