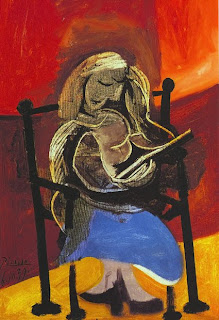 Few TV shows have ever foregrounded music like TREME is doing on HBO. But I remember a time when music was nearly absent on TV in dramas and comedies. When did it begin to pick up speed even as background? I remember Cosby using jazz quite a bit. I even remember The Waltons using country music now and then.

But what shows first made you look for the musical credits? When did it become so important in setting the mood? Anyone pinpoint it?
Posted by pattinase (abbott) at 9:31 AM

HBO always does a great job of matching music to the them or mood of their series. I sued to look forward to the end credits of the Sopranos, Deadwood, and even True blood to see what tune they would play.

I always liked hearing variations on a show's title theme used throughout the episode. One of the first that really grabbed me was 77 Sunset Strip.

That theme from 77 will be in my head forever.
Yes, HBO and a lot of the cable shows do a great job with it.
I remember trying to find music frin Ally McBeal--what ten years ago?

Peter Gunn was the first show, admittedly I was young at the time, that I ever really noticed, or thought about, music as associated with a program.

Actually if we are talking about theme songs I remember a lot of those. But newer shows are tending to use music to set the mood throughout the show.

Oh, a great example. And I do remember music being key. Thanks for an early leader.

When I was a kid, most sitcoms had a 'theme song' that explained the plot of even the most inane show: The Beverly Hillbillies, Gilligan's Island, The Brady Bunch, The Addams Family, My Mother the Car (yes, I can still remember the lyrics!), Car 54 - Where Are You, The Real McCoys.

I miss those days.

I've never see 77 Sunset Strip. I don't think we ever had it in the UK. The Miamai Vice example is spot on.

Yes, I wish I had such help sometimes too. I bet it's on DVD, Paul, but it probably doesn't hold up. Few do.

Leaving aside theme songs and just considering background music, "Peter Gunn" is the first one that caught my attention. But it would be 30 years before another show would have music so essential to the mood of the show--"Twin Peaks".

The Young Ones had a musical guest performing in every episode. Outside of that, however, music was not a big element of the show.

I suppose Freaks and Geeks had plenty of period (early 80s) music, but I have not seen it since the initial run so I don't really remember.

Twin Peaks, great one.
Funny how few TV shows have been about musical groups like THE Monkees. Or music.
Fame, of course. That was a series, right?
Happy Days had music, of course. But mostly only at Arnolds and at dances.

As already said, Miami Vice changed everything. In some ways it was a precursor to MTV. And of course there was the ill-fated *(but for me, highly enjoyable) Cop Rock.

They didn't give COP ROCK enough of a chance. It must have only run a few weeks.

I think it would be NAKED CITY (1957), PETER GUNN (1958). It wasn't just a theme song, there ws music throughout to build tension and preview the mood of the coming scene.

I remember the music in Peter Gunn a bit--was it set in a bar sometimes-- but not Naked City. Probably on too late for me. Jazz was really king in the fifties.

The Gilmore Girls always had a lot of musical references and namedropping in the script, and one of the long-running subplots was that of of the struggling garage band - where one of the members was played by Sebastian Bach from Skid Row. Truly one of the best acting appearances of a musician ever.

I agree with all the previous examples--77 SUNSET STRIP, PETER GUNN, etc.--but the show that really played around with music was ALLY MCBEAL. David Kelley (no relation) had Vonda Shepard in practically every episode making great music. Very innovative!

I don't know if this counts since it was a movie I saw on TV but Dave Grusin's score for the Yakuza has stayed with me for (what?) forty-five years now?

More recently, Cold Case often features music in their episodes to set the tone of the time period they're going back to.

I have to go with PETER GUNN (whose soundtrack became a hit) and MIAMI VICE (the first time that hits became the soundtrack).

I have to go with PETER GUNN (whose soundtrack became a hit) and MIAMI VICE (the first time that hits became the soundtrack).

Dave Grusin-haven't heard that name in a while! Cold Case does a great job integrating the times and the music.

Actually, there've been a number of series about bands since THE MONKESS, though a number of those were cookie-cutter cartoon series about such bands as the Beatles, the Jackson 5 and the Osmonds...and most of the rest, such as THE PARTRIDGE FAMILY, two extraordinarily horrible series of FAME (where they let their lack of talent run wild), and (cheating a bit) the record label sitcom THROB have been pretty dire. (As were such other kids' cartoons over the years as THE ARCHIES, JOSIE AND TEH PUSSYCATS, THE GROOVY GHOULIES, and JEM...even when such series have featured surprisingly decent bubblegum pop--THE BANANA SPLITS might've been a little easier to take as a series, certainly when compared to most of the MTV and other "reality" series since).

Rick, as a fan of soundtracks, is correct, though...tv dramas have employed incidental music deftly at least since DRAGNET began offering video episodes, and highlighting music within sitcoms certainly started no later than Ricky Ricardo and his Cubano orchestra, and then those big band veterans the Nelsons letting Ricky push his eventual hits on OZZIE AND HARRIET. (I think Richard Rodgers's soundtrack for VICTORY AT SEA was the first full tv soundtrack, unless we count AMAHL AND THE NIGHT VISITORS, to gain a lot of attention as its own recording.)

While the music was the only tolerable aspect of most of CBS's rural sitcoms (well, Buddy Ebsen was at least competent in TBH, unlike the rest of the cast), and Sherwood Schwartz was always ready to make a musical episode of his farcical series (notably GILLIGAN'S ISLAND and THE BRADY BUNCH), the best '70s sitcom where the music was integral that I remember would be WKRP IN CINCINNATI. SCTV NETWORK 90, a few years later, did the most to incorporate musicians pushing their current recordings into comedic sketches, compared to earlier comedy-variety series showcases for musicians.

MTV actually popped up at about the same time as MIAMI VICE. amd TREME's parent, WKRP's child FRANK'S PLACE wasn't too much later.

THE COSBY SHOW did do some incidental jazz, and the fellow who played Cosby/Huxtable's father was the worst fake trombonist I've ever seen (Wendell ---? Pierce? I'm using an unfamiliar browser and machine here, so will check and come back...the THE WIRE veteran who plays the trombonist in TREME isn't nearly that bad, but isn't great).

The earliest tv music that made a strong impression, apparently, was that of the Monkees, as infant me would apparently sing Monkees songs to my parents. I SPY also made an impression. The earliest I remember, aside from the initial I SPY hazily, would NIGHT GALLERY.

Hm, I always liked that MONKESS series. Oh, the farce!