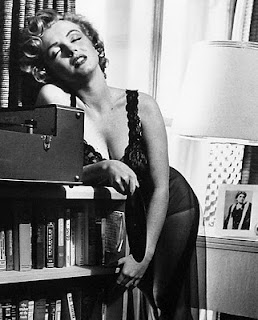 Friday's Forgotten Books was nominated for a Special Service Award at Spinetingler's annual love fest. I am honored for all of us to be noticed because it is quite a list of contributors over two years.

If you care to vote for us, go here and do it. There are other wonderful websites honored too.

Congratulations to all of the worthy nominees.

Don't forget. Last Friday in April-Forgotten Story Collections. Also, May 14, 21, 28, George Kelley will be hosting this baby. His link is below.


Elspeth Antonelli is the author of 12 murder mystery games (available through www.host-party.com) and 2 mystery scripts that have been performed world-wide. She is currently finishing a "Claudio Rossi" mystery novel entitled "Spy My Shadow" which will be the first of several books taking place in England or Guernsey between 1935 and 1945.
THE DAUGHTER OF TIME, Josephine Tey 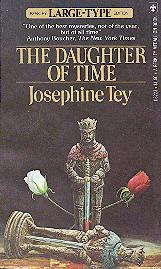 THE DAUGHTER OF TIME, Josephine Tey’s 1951 classic detective novel with a twist, was the first book I read that argued what I was learning in history classes wasn’t necessarily true.
Like most students, I only knew of Richard III as he was portrayed in Shakespeare’s play. He was the ultimate villain. Evil personified. Then, getting interested in Tudor history, I picked up this book and everything changed.
Alan Grant (Tey’s detective who also appears in five other novels) has been injured and is forced to stay in hospital for an extended time. To help pass the dragging hours, one of his friends brings him a collection of postcards of historical figures - each one a player in a historical mystery. Grant becomes fascinated with a portrait of Richard III and from his hospital bed (and with the help of a new American friend) finds a solution to the case of the Princes in the Tower.
Grant’s conclusion is Richard III was a victim of Tudor propaganda. The evidence for this ranges from no contemporary accusations of the crime were ever made, to Richard’s continuing friendship with the boys’ mother to the lack of political advantage. Grant believes the face behind the murder to be Henry VII.
This book is a fascinating study of two characters - one alive in the present and one in the past - and Tey’s gifted writing turns a history lesson into a whodunit.
This was the first time I had read a book that was a perfect example of the axiom “History is written by the winners’. If you have read it before, read it again. If you’ve never read it, pick it up. There’s a reason the Mystery Writers Association of America included it in their list of Top 100 Classic Mysteries.

NOR LIVE SO LONG, Sara Woods

Anthony Maitland and his wife, Jenny, are on holiday in a Yorkshire village, Three young women have been strangled. Anthony comes to the rescue. His wife's nephew, Stephen, is the soli

citor for a friend, Peter Dutton, the main suspect in the strangling. The locals think otherwise, having chosen their own suspect. Anthony comes to the rescue.

Having read this over twenty years ago, I have little memory of it. But I read most of Sara Wood;s output and always got what I expected.

During the Second World War, she worked in a bank and as a solicitor's clerk in London, where she gained much of the information later used in her novels. Lana married Anthony George Bowen-Judd on April 25, 1946, and they ran a pig breeding farm between 1948 and 1954. In 1957 they moved to Nova Scotia where she worked as a college registrar until 1964.

In 1961 she wrote her first novel, Bloody Instructions, introducing the hero of forty-nine of her mysteries, Anthony Maitland, an English barrister. (This is from Wikipedia.)

I chose this particular book because it was the last of hers I read, and I read it in 1986. Sara Woods' books were more or less courtroom dramas. Almost every book featured a trial. Anthony Maitland's wife and uncle figured heavily in the stories. I think I read most of them. It amazes me that a writer of this number of book could be so utterly forgotten today.

This according to reviewer Alan Paul Curtis on Whodunnit, , "Sara Woods had a rather rigid method used in her novels: There were always two parts – the first where the crime (or crimes) were committed and some research was accomplished, then the last section which always dealt with the trial itself. Ms. Woods may have been imitating the stories of Perry Mason here – or perhaps it was the other way around – but nonetheless, she achieves an interesting formula and a captivating tale. Perhaps one of the reasons Ms. Woods wasn't the recipient of any major awards that we're aware of is the fact that her books lack the intricate plots such authors usually employ. Whatever the reason, it's not enough to disregard her efforts, and all her books are entertaining, with the offer of a bracing, uncomplicated plot." Anyone else remember Sara Woods?


Ed Gorman is the author of Ticket to Ride and numerous other novels and collections You can find him here. 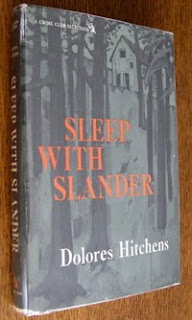 Sleep With Slander by Dolores Hitchens
For most of her long modestly successful career Dolores Hitchens wrote the kind of books that won her steady library and paperback reprint sales but never the kind of acclaim that made her notable to mainstream readers.
She wrote cozies as well as a variety of stand alone mystery novels that were always good and every once in awhile excellent. Then in 1960 she wrote one of her two private eye novels, Sleep with Slander and to me it was and remains a remarkable piece of work.
Not being a mystery historian, my impression of female written p.i. novels of the Thirties and Forties and Fifties was that many of them were pastiches. There was a lot of winking going on between writer and reader as “gals” walked the mean streets. There were a number of exceptions, Leigh Brackett’s work being one example, but I don’t think any woman before Hitchens demonstrated that the feminine sensibility could take the form in a different and exciting new direction.
Private Investigator Jim Sader is well into middle-age, divorced and coping with his confusion and loneliness not with a bottle or a broad but with the kind of quiet and considered life many middle-aged people, especially of that era (the novel was published in 1959) resigned themselves to.
The other character in the book is Long Beach. The place descriptions—and we travel from the upper class to underclass—become inextricably bound up with the people who live in a given place.
Sader specializes in finding missing persons and it is on such a journey that he finds himself involved in a crime that back then gave some librarians pause. That’s all I’ll say about the plot. But it’s the mood and the psychology that gives the story its brooding life. Every once in a while writers, good and bad alike, write above their usual level of talent and skill. If it happens only once or twice it’s probably luck; if it happens consistently it’s a kind of genius (or some damned GOOD luck).
Hitchens was never this good again but Sleep With Slander has obstinately kept her name known to a small cult of fans for more than five decades. This is a book you should read if you like mystery novels. Or even if you don’t like p.i. novels. Dolores Hitchens made the form all her own.
As Bill Pronzini said in 1001 Midnights, "the best hardboiled private eye novel written by a woman--and one of the best written by anybody."

I know there are occasional nay sayers about THE DAUGHTER OF TIME but it's exactly the kind of book I really like (see Colin Dexter's THE WENCH IS DEAD for a very similar book) and I'm a big fan.

My husband used it in his course about Kings, Princes and Presidents. It does make you want to learn more about Richard for sure.

COngrats on your Spinetingler nomination, Patti. And I've been seeing your stories everywhere from CrimeFactory to Needle. You are one busy lady.

...and I just posted a story collection today. Well, I suppose I can get another one in by the end of the month. Thanks for the reminder, I'd put it on the calendar and forgotten.

THE DAUGHTER OF TIME is very good though not forgotten, it appears on most lists of quality or significant mysteries. Dexter's WENCH IS DEAD is also excellent.

Thanks, Naomi. A few of these were in the works for some time.
Sorry, Rick. Daughter of Time is the most-mentioned book on her. I think my favorite Tey is THE FRANCHISE AFFAIR though. Also based on a true story.

My link could well go from black to red (green might be even more appropriate)...my (too hasty, but nonetheless) entry for this week is up.

"Monroe gets high on paper dust."

I remember Sara Woods's name, but I'm sure I haven't read any of her novels...did she do any short fiction, I wonder...

I doubt it. She needed a lot of space to play out the trial.