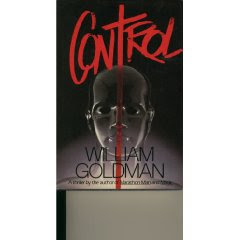 Robert Gregory Browne is the author of Kiss Her Goodbye
CONTROL by William Goldman
For those of you who have never heard of William Goldman, you might know him from his movies, Butch Cassidy and the Sundance Kid, and Princess Bride, and well as more recent work like his adaptations of Misery and The General's Daughter.

Before Goldman got into screenwriting, however, he was a novelist -- and a damn fine one at that. Marathon Man is probably one of the best thrillers ever written and I'll always consider it one of the novels that taught me how to write. Magic is another great one that was made into a thoroughly mediocre movie that flat out ruined the novel's excellent jump-out-of-your-chair twist.

But one of Goldman's very best books is all but forgotten, and that's CONTROL, which melds the thriller with other genres in ways that I can't describe because it would spoil the story for you. Let's just say that Goldman is the master of what he calls the "reversal" and this book has one of the biggest reversals you're bound to find.

Released in 1982, CONTROL is the story of an artist named Edith, a psychopath called Billy Boy, a couple of mismatched cops and so much more. And that's all I'm willing to tell you. I challenge anyone to read the first paragraph and put the book down. Unless your house is on fire, it will be pretty much impossible and you'll find yourself devoting very large chunks of your day to finishing CONTROL.

Al Guthrie is the author of Savage Night and 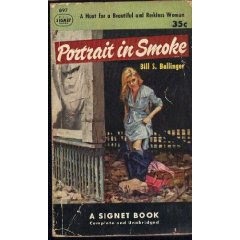 Portrait in Smoke by Bill Ballinger (1951)

A minor classic. A gem that shouldn't be. Reason I say that, character

motivation is weak throughout and that's usually a killer for me. But

throughout. It alternates between first person, in the shape of Dan April,

collection agent, and third person in the shape of Krassy Almaniski, psycho

femme fatale. A device used with increasing frequency these days, but I

don't know of too many examples from over 50 years ago. In the psycho

league, Krassy's right up there alongside Jim Thompson's Lou Ford and Horace

obsessed with tracing Krassy -- although the logic behind his obsession (he

and not analysed too closely. Dan tracks Krassy down, chapter by chapter,

from her youth to the present day. Every other chapter, we see (from

Krassy's viewpoint), what Dan doesn't know. When he finds her, eventually,

to ruin is complete. Or is it? If Goodis had written this the conclusion

would be inevitably bleak, but Ballinger serves up a clever ending.

Woody Haut is the author of Pulp Culture: Hardboiled Fiction and the Cold War and Heartbreak and Vine: The Fate of Hardboiled Writers in Hollywood.
Hard Rain Falling by Don Carpenter

First published by Harcourt in 1966, Hard Rain Falling by Don Carpenter would make a brief appearance on the fringes of the best-seller list. Unfortunately, after a handful of reprintings- the last a Ballantine paperback edition in 1987- the book pretty much vanished from sight. I remember briefly meeting Carpenter- it was Richard Brautigan who introduced us- at a coffee house in the late 1960s. At the time I actually had no idea Carpenter was a novelist, much less one with a truly great novel under his belt. But then it was unlikely that such a hardboiled, street-wise rendering like Hard Rain Falling was going to qualify as a livre du jour in that particular time and place. After that initial success, in which he heralded as a major literary talent, Carpenter would continue to publish, only to succumb, like so many before him, to the lure of Hollywood, caught between embracing its promise of fame and fortune and rejecting its advances and accompanying compromises. So It’s hardly surprising that many remember Carpenter simply as the screenwriter of the 1973 cult movie Payday, in which Rip Torn plays a third-rate Hank Williams. It’s a film Carpenter co-produced with the late jazz writer and Chronicle critic Ralph J. Gleason. Carpenter followed Payday with a screenplay based on Charles Bukowski’s novel Post Office, which, however enticing that might sound, would become yet another aborted project.

It might have been published over forty years ago, but Hard Rain Falling reads like it could have been written yesterday. Built around the life of Jack Levitt, an orphan who grows up to be a drifter and constantly in trouble with the law, the book’s honesty, insight and lack of sentimentality make both the narrative and its protagonist heart-renderingly real: “He was buried inside his skin, bones, and nerves, and he would have to get out of there if he was to understand his pain. If it was pain. He knew people suffered agony, and he wondered if what he felt was agony. It did not seem like the descriptions of agony. He wondered if it wasn’t just self-pity again.” Moving from Portland pool halls to San Quentin, where Levitt falls in love with his cell-mate, to the mean streets of San Francisco, the novel, which takes place between 1929 and 1963, carries an intensity that perhaps only a young writer willing to pour out his soul can instill in their work.

In effect, Hard Rain Falling revises both the juvenile delinquent novel, so popular during the late 1940s, and the prison novel. In doing so Carpenter creates something unique, a coming of age street novel that unflinchingly examines race, class, male sexuality and the injustices perpetrated by the criminal justice system. In this way it can be classed alongside books by authors like Robert Tasker, Jack London, Clarence Cooper Jr, Chester Himes and Edward Bunker. Coming out of the Dreiser school of social realism, Hard Rain Falling is not only brutally honest, but also beautifully rendered. What’s more, no one, Walter Tevis and Richard Jessup included, writes more convincingly about the complex world of poker and pool-hustling. Though he would go on to publish some ten books, including at least three novels, Carpenter was never able to recapture the magic of Hard Rain Falling. Sadly, in 1995, plagued by medical problems, and haunted by Brautigan’s suicide, Carpenter, at age 64, ended up shooting himself at his home in . As a reminder of how cruel and beautiful this world can sometimes be, Hard Rain Falling deserves greater recognition and a publisher willing to reprint what must surely constitute one of the best American novels to appear, however briefly, over the last fifty years.

Craig McDonald is the author of Head Games and Toros and Torsos.

of Night by Craig Holden

I first heard of Craig Holden at a James Ellroy signing in . Holden was in the audience that rather cold night and Ellroy took the trouble to tout CH’s most recent novel — it was a rare and ringing endorsement on the part of the Demon Dog.

I secured a copy of The Four Corners of Night (1999) and was pole-armed. Night is always in my crime fiction Top 10; depending on mood, it often cracks my top five.

Set in a mythical city in northwestern Ohio — a kind of re-imagined and combined Toledo/Detroit — the novel turns on the uneasy axis of two cops and the woman who stands uneasily between them. It’s a classic triangular dynamic that informs everything from Bruce Springsteen’s noirish “Highway Patrolman,” to James Ellroy’s own watershed novel, The Black Dahlia.

When I read Dennis Lehane’s , I finished the novel so convinced Lehane’s River was informed and inspired by Holden’s , I went looking for proof of concept. I found it in an interview Lehane gave during his promotional cycle for his then-latest-series entry Prayers for Rain; he had, he said, finished Holden’s novel “just last week.” was unveiled in 2001.

That’s the kind of subtle classic Holden’s Four Corners of Night is — a novel that not only inspires other novels, but inspires novels that go on to inspire still other books.

The language sparkles from it’s richly evocative opening in an all too-real Denny’s along the Ohio-Michigan border (“‘Buck ninety-nine,’ Bank says. ‘Who can afford not to eat this shit at that price?’ He’s said this over the years maybe fifty times in this restaurant with ”), to wonderfully evocative lines that touch poetry (“We have no business at this scene…standing in the river of some mother’s grief and feeling my own worthlessness.”).

Four Corner’s exploration of the ramifications of a child’s abduction pushed the boundaries of crime fiction to the far four corners; Holden’s book expanded the reach and breadth of crime fiction and shows that in the right hands, a crime novel can be both a page-turner, and an atmosphere-rich and wrenching character study.

Whenever the words won’t come — or if they come too easily — Four Corners of Night is one of the two or three books I consistently dip into for inspiration or humbling.

Hey Patti, I'm so enjoying these forgotten book reviews! Thank you for pulling this all together!

My post is up for The Sweet Second Summer of Kitty Malone by Matt Cohen
http://barriesummy.blogspot.com/

Here it is and thanks for your continuing support of the effort.

Great Information blog ! Thank you for keeping up the good work. I look forward to returning to your blog, and learning more from you !