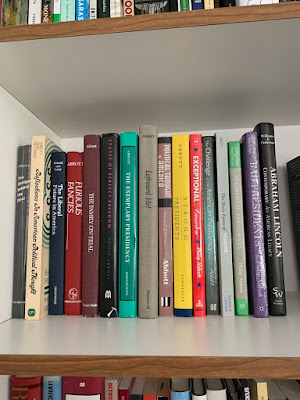 These are the books Phil wrote over his career. Not the last one on Abraham Lincoln though. He had a chapter in that book and it drifted into this photo.( And  he had many other chapters in books).

Well, I discovered something while I was putting these books in order. ONE WAS MISSING. Kind of crazy but I went online and ordered it. It just seemed wrong not to have one of every book he wrote.

His first book was his dissertation revised. THE SHOTGUN BEHIND THE DOOR. It looked at reasons for obeying the state. Philosophical reasons laid out by writers such as Hobbes, Locke, Rousseau, etc. Very much his training in grad school and in fact, I got an email recently from his dissertation adviser still lamenting that Phil had drifted away from traditional political theory. Phil did drift. His books concerned such diverse subjects as American inventions (ie. the quilt and the motel), discussions of famous American texts (i.e. King's "Letter from a Birmingham Jail," the evolution of the American family, American biographies, and his last four books on the American Presidency.

My favorite book was LEFTWARD HO! and the reason I liked it so much was because I came to New York with him many times in the late eighties and early nineties and helped him go through boxes at the NYPL and copy information on V.F. Calverton, a left-winger in the thirties and forties who slowly transitioned to a right-winger in the fifties. The contents had to be looked at very carefully and notes could only be taken in a certain way. Getting into the room required all sort of protocol. And getting out was not much easier.
A whole box was his love letters to his wife, who lived in the same house he did. He wrote her several letters every day despite spending every night together.  Calverton (not his real name) was an obscure figure but darn if another book on him didn't come out just as Phil's did.

I guess nothing is more relevant today that BAD PRESIDENTS.

Great book titles! I wonder what Phil would have thought of the Coronavirus Pandemic and the chaos in Washington, D.C.

And he thought Bush was standard bearer when he wrote it.

He got to see a lot of the chaos in Washington. But he was always able to stand back from it, which I am not able to do.

What a wonderful collection, Patti. Thank you for sharing it.

Patti, I just watched the Senate Health Committee question Dr. Fauci and some other medical experts. Lamar Alexander of Tennessee asked Fauci if the University of Tennessee could open up in September if a vaccine is available by then. Dr. Fauci rolled his eyes and said a vaccine by September is "unlikely."

Thanks for sharing these, Patti. He was a a skilled writer along with everything else...

I think the most optimistic prediction is a year and most seem to say longer.
Thanks for stopping by, Jeff.
He was pretty special all right. Would like to have him here now! Or maybe not, if he was sick.

Phil's books do cover a range of subjects, I especially like American inventions and famous American texts. And very good titles. I am glad you shared this.