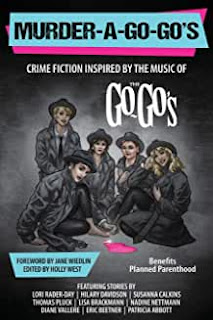 This is posted here as the request of Holly West, who edited this anthology.

"You guys were gone a long time," Tom said, sleepily opening his eyes. "Were they out of clam rolls or something?"
"Daddy, you'll never guess what happened."
"What happened?" he said sitting up. The two women looked at each other.
"Grandma met a bunch of beatniks on the beach near here. They sang songs, did the mambo, and wore funny hats that she's gonna show me later."
"Today?"
"It was a long time ago, Daddy," Ava said chuckling."When kids did olden things."
"But you got your clam rolls, right?"
The three of them nodded.
"Anyone up for some ice cream?" Tom asked.
"I sure am," Katherine said.
"Mommy, I've never seen you eat ice-cream," Ava shrieked. "What kind do you like?"
Katherine looked at her mother. "What kind do I like, Mom
Bunny paused. "Something green, I think. Maybe pistachio."
"But if could be chocolate mint, right?" Ava smiled. "That's my third favorite flavor. I hope it's  that        flavor. You could take after me sometimes."
Posted by pattinase (abbott) at 2:26 PM

Now, if ever there was an anthology I could write for...

Are you a big fan of the GO GOs?

I liked this anthology a lot, and just sent it to Tracy.

I have been a fan of the Go-Go's, and had a powerful media crush on Jane Weidlin back when. I gathered up all the GG albums, including GOD BLESS THE GO-GO'S, the turn of the 2000s reunion album. Like/love their early punk demos and concert /rehearsal recordings. Have a couple of Wiedlin's solo albums. Less enthusiastic about Belinda Carlisle and Charlotte Caffey's post-band career.

Pretty much a Bangles fan of similar severity. But CBS did their best to deny the Bangles royalties for their own compositions, releasing mostly cover versions as singles (and the song Prince Rogers Nelson gave them). The Bangles' turn of the millennium album, DOLL REVOLUTION (a cover of Elvis Costello as title song!) is similarly excellent. They've recorded more since.

Lovely memory of watching the cablecast video of their 1999 concert in Central Park with my parents (to promote GOD BLESS), on a visit back to their house, and how much my mother enjoyed the fact of an all-woman band performing thus; my father had difficulty believing they were all about five years older than I was at the time (and still), but I suspect this doesn't occur to him much these days).