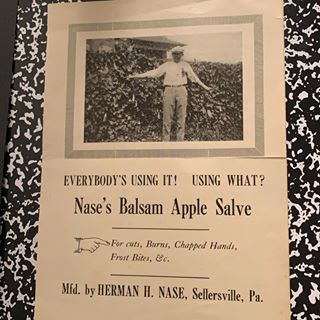 I think I have posted this on here before but I ran across it again yesterday. This is the cover of a four page pamphlet on my grandfather's business. The rest of it are "testimonials" mostly from neighbors and family members. A balsam apple is not a real apple.

"The Balsam Apple is a tropical vine grown as a garden annual with bright yellow flowers followed by curious, oblong, yellow-orange warty fruits that burst open when ripe, and has attractive, glossy green foliage. It is native to the tropical regions of Africa, Asia, and Australia.
Although the pale yellow, deeply-veined flowers have a subtle beauty, its round, somewhat warty, bright-orange fruits, or "apples", are its most distinguishing feature. When ripe, the fruits burst apart, revealing numerous seeds covered with a brilliant scarlet, extremely sticky coating. The Balsam Apple was introduced into Europe by 1568 and was used medicinally to treat wounds. Most of it is poisonous to eat, in fact. 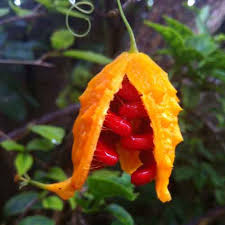 Monticello has a lot of these vines. Or did.

Laura Nase, Herman's wife, gave birth to nineteen children, many dying in the first year or two. I think they ended up with thirteen surviving childhood. Herman worked in a cigar factory so any way to add to the income was probably welcome.

I think it was probably not uncommon to sell salves like this at country fairs and stores. I wonder if it's still around. Any entrepreneurs in your family? Anyone ever seen a balsam apple?
Posted by pattinase (abbott) at 8:06 AM

No! It is extremely creepy looking and I can well believe that it is toxic to eat. Yuck.

New to me. Interesting appearance.

It seems like they are mostly in Asia and the middleeast.

I think I have, but not recently. My father and sister did put together computers and sell them in the '90s, but not much in the balm business...my mother took a whirl at Tupperware and the like in the few years she didn't have a more formal 9-5 or 10-3 sort of job.

What an interesting history! And I don't know much about balsam apples, so it's good to learn about those, too.

I don't think I knew you had a sister, Todd.
A weird sort of fruit, Margot.

My sister has felt she was my sister since very early childhood, but didn't start taking steps to make her body conform to her persona, and for that matter to let most of the people she knows well be aware of this, till a year ago, +/- a month or so.

Much less startling, I think I saw the balsam apples in Hawaii.

Is there a connection between the tree these grow on and balsam wood?