and IN GOD WE TRUST, ALL OTHERS PAY CASH.

Jean Parker Shepherd Jr. (July 26, 1921 – October 16, 1999) was an American storyteller, radio and TV personality, writer and actor. He was often referred to by the nickname Shep.[1] With a career that spanned decades, Shepherd is known for the film A Christmas Story (1983), which he narrated and co-scripted, based on his own semi-autobiographical stories.[2] 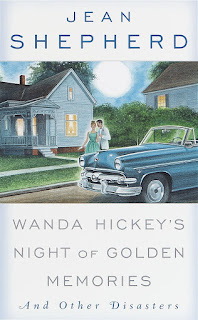 Of course, the movie, A CHRISTMAS STORY and its yearly showings, far surpassed interest in the books but there are so many more charmers in the three or four books of his I have read. It is mostly about his childhood in rural Indiana and he told these stories first on his radio show, but  good humor, especially his, which was neither bawdy nor saccharine, is rare. To this day, any neighbor that turn troublesome to our family is thereafter known as the Bumpus'. He is very good at names: Ollie Hopnoodle, Ludlow Scut Farkus, Ludlow Kissell, Grover Dill, Wilbur Duckworth and on and on. When your name is funny, how can you not be. Highly recommended.
Posted by pattinase (abbott) at 5:00 AM

I'd heard of this one, Patti, but not read it. That's what I like about FFB - all sorts of great reminders of books I should try.

And let us not forget his enthusiastic recommendation of the non-existent I, LIBERTINE by Frederick R. Ewing, a great literary hoax that created such a demand that it was listed on NYT's Best Seller list. Shepherd then got together with Ian Ballantine and Theodore Sturgeon, resulting in Sturgeon ghosting the book using Shepherd's broad outline; the last chapter of the book was written by Betty Ballantine after Sturgeon had fallen asleep while trying to write the novel in one nonstop marathon.

I remember first reading these in Playboy. Very entertaining, especially when you listen to Shepherd's narration, as in A CHRISTMAS STORY.

"You'll shoot your eye out!"

And, as Jerry doesn't quite spell out, Shepherd was demonstrating the corruption of the NYT "bestseller" list through his little stunt.

Have you ever listened much to his radio monologs, which were the spark of much of his subsequent prose?

I love Shepherd's stories and read them first in PLAYBOY, like Jeff. I have several of his collections and plan to reread them someday. I've never heard the radio versions, though.

https://archive.org/search.php?query=subject%3A%22Jean+Shepherd%22 . Archive.org files of his radio shows and more.

Thanks, Todd. THis will be a real treat.

I wouldn’t characterize Jean Shephed’s boyhood home as rural. Human IN was part of the Industrial Midwest. I read his books years ago, but I seem to remember him writing that if Chicago was the city of Broad Shoulders, then Homan was Chicago,s broad rear end.

Love the movie, but I haven't read him, Patti. Thanks for the introduction!

I have and have read and reread all of these, and just love them.

I thought I had a copy of one of his books but I don't find it in my catalog. I will look for his books at the book sale.

Also, a number of episodes of Shepherd's PBS series, JEAN SHEPHERD'S AMERICA, have been uploaded to social media, for example:
https://www.youtube.com/watch?v=ghDpLSRQSug "Trains"