Andi Shechter has been a publicist, chat host, interviewer, convention-planner, essayist and reviewer. She lives in Seattle with far too many books. 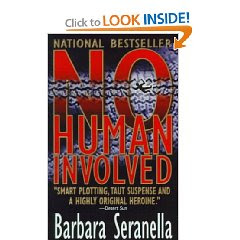 A couple years after I read NO HUMAN INVOLVED, I was hosting a discussion about hard-boiled mystery at a convention on a Sunday morning, It was a casual thing, a bunch of us sitting around in a circle and chatting. One of the participants in the conversation was so interesting, had so much to say and yeah, that was Barbara Seranella. I valued her friendship and the chance to catch up with her when she came to town on a book tour, and I miss her still. She had talent and used it. Her books are well crafted, and her protagonists unforgettable. This week, I'm reading my way through the Mancini series and being impressed all over again. I don't want her to be gone.
Posted by pattinase (abbott) at 6:00 AM

It's interesting you chose this one, Patti. I thought Mancini was an interesting character, too, although I don't usually go for the 'deeply damaged' type of protagonist. Thanks for reminding me.

I loved Seranella's Munch Mancini series and was saddened when the author died so young.

Thanks for this reminder that this book needs to be moved up on my TBR pile.

SJ Rozan has the unwelcome news about Andi Shechter:

Andi Malala Shechter has died. This is a great loss, to the writer/reader community, to progressive causes, and to me. Andi was one of the first people I met when I came into this world and she was first a great supporter and then a great friend. As does pretty much anyone who knew her, I have too many Andi stories to tell them all, but here's the first: I was registered for Bouchercon in Seattle in 1994. My first book was just out and I wasn't on any panels; I didn't even really get what Bouchercon was. Then four days before the con I got a phone call from someone named Andi. A NYC writer I knew had to drop off a panel and recommended me as her replacement. It was the Humor Panel, and Donald Westlake, among others, would be on it. Would I do it? This Andi person said she'd already read my book and I'd be perfect.
"But," said I, "I'm not funny."
The Andi person cracked up. "See?" she said when she stopped laughing. "I knew it."
I did that panel, it was great, and that was the start of a beautiful friendship.
Goodbye, friend. RIP.