Forgotten Movies: ONE SINGS, THE OTHER DOESN'T 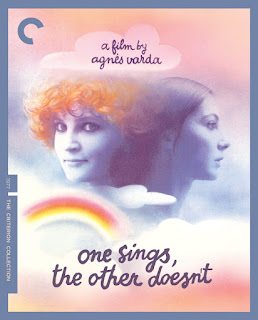 Agnes Varda directed this film in 1977 and it's  the most comprehensive look at being a young woman in that era I've seen. It confronts both the problems of unwanted pregnancy and the problems of wanted ones. Two young women meet in 1962, both wrestling with their womanhood. This was such a specific look at the Roe v Wade era-but in France, with short trips to Amsterdam and Iran. It was very good in most respects although long interludes of singing nearly derailed it for me. Men are given pretty short shrift in this film-a real ground-breaker in that regard. At its heart, it's about female friendship, a rare thing in a film that was not a comedy.
Posted by pattinase (abbott) at 6:00 AM

This one sounds good, Patti. Must admit I've not seen it, but I'm glad to learn about it.

I haven't seen this, but I'll track down a copy.

One I've been meaning to see for years. It will pop up on cable and I will find it when it's 20 minutes into it. Among the films Kathi Maio recommended...