Forgotten TV: WIRE IN THE BLOOD: THE COLOUR OF AMBER 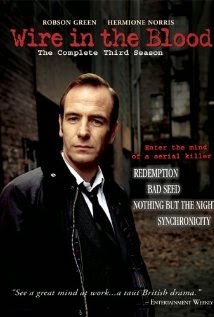 When an 11-year old girl is seen being dragged into a car kicking and screaming, the police issue an Amber alert. As the minutes and hours pass by, they know their chances of rescuing the girl diminishes. As Tony Hill reviews the evidence however, he becomes less and less convinced that this is an abduction by a stranger and believes that the girl must have known her attacker. The missing girl's mother is overwrought and her stepfather has a conviction for assault. A sudden twist however changes the entire nature of the investigation leading Tony and DI Alex Fielding to realize they had made a fundamental error at the outset.(From IMDB)

This is a very fine episode. To tell you why would ruin it. It is clever in its setup and clever in the denouement. Despite watching it on a defective DVD, I was riveted.
Posted by pattinase (abbott) at 9:30 AM

I'm afraid that, as with the books, I lost interest in the WIRE IN THE BLOOD television series. I generally prefer McDermid's stand alone books. After 2 or 3 of these I gave up on them and stopped after the first of the television adaptations. The books all seem to be about serial killers.

I've liked Robson Green in many things and Hermione Norris in MI-5 (orig. SPOOKS in England).

Barbara loves both the books - has read them all and is eager for more - and these productions. I watched part of one and it was pretty darn good.

This was not about a serial killer, which is why I liked it. She really surprised me here.

I'm currently watching "Grantchestet" on PBS Mystery (a bit of a first for me--watching the shows when they first air, versus waiting for them to be available on Netflix) with Robson Green. He's moved out of his leading man roles and now he's playing a seasoned, rather crusty policeman who finds himself working cases with a local minister.

I'd be curious to see the villain in HAPPY VALLY play the minister in this one.

Like Jeff, I lost interest in the WIRE IN THE BLOOD TV series, too.

We're watching GRANTCHESTER too, though I found this week's second episode nearly unwatchable. And why does every priest or vicar in 1950s England (on television, at least) have an unbearable harpy for a housekeeper (here and Father Brown)?

The review in the NYT turned me off.

Well, I love Robson Green in just about anything. I do remember watching some of this series a long while ago on Masterpiece Mystery, I think.

This episode sounds especially good. Thanks for the tip. I'll go hunt it up.

P.S. It's available at the moment to watch on youtube.