01/27/2015 7:00 pm
Former New York Magazine Culture Editor Adam Sternbergh will celebrate the release of NEAR ENEMY, the dynamite follow-up to his beloved debut SHOVEL READY, and another  lean noir thriller which returns us to a half-deserted New York dystopia, to the adventures of garbage-man turned unvarnished psychopath, Spademan, and to a corrupt, crime-ridden vision of the future far more plausible than we might think.

Join Sternbergh for a discussion of  the role and relevance of the anti-hero in fiction and TV—with Emily Nussbaum (New Yorker TV critic), A.O. Scott (NYT film critic), and author Megan Abbott (The Fever).


ALSO THIS FROM OUR FRIEND, RON SCHEER 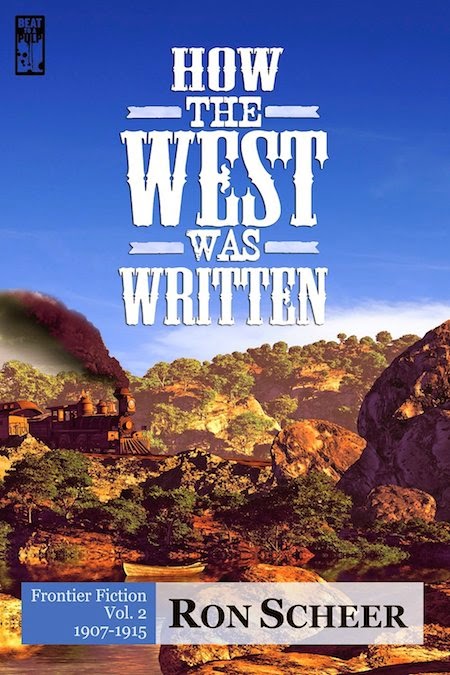 How the West Was Written continues the chronology of western writers that began in the first volume with Mary Hallock Foote's The Led-Horse Claim (1883). Here is a short description of the new volume from its introduction:

During the years 1907–1915, frontier fiction boomed with new writers, and the success of Owen Wister’s The Virginian (1902) began to make itself felt in their work. That novel had made the bestseller lists for two years running. With the continued popularity of Buffalo Bill Cody’s Wild West show, and the appearance of one-reeler westerns on movie screens, many featuring the adventures of Bronco Billy Anderson, the cowboy hero was becoming an established mythic figure in the public imagination.

New writers capitalizing on this interest begin to emerge in numbers and include Zane Grey, Dane Coolidge, Charles Alden Seltzer, William MacLeod Raine, and Eugene Manlove Rhodes. Fans of cowboy westerns will find this book's discussion of these storytellers of particular interest.
Meanwhile, for writers of popular fiction, the frontier was also a subject for exploring ideas drawn from current public discourse—ideas about character and villainy, women’s rights, romance and marriage, democracy and government, capitalism, race and social boundaries, and the West itself. With each new publication, they participated as well in an ongoing forum for how to write about the West and how to tell western stories.
Taken together, the chapters of this book describe for modern-day readers and writers the origins of frontier fiction and the rich legacy it has left us as a genre. It is also a portal into the past, for it offers a history of ideas as preserved in popular culture of a century ago that continues to claim an audience today.

Currently available at amazon for kindle and in paperback. Also in paper at Createspace. Order both volumes from amazon here.
Posted by pattinase (abbott) at 11:20 AM

I wonder why distopian settings are so attractive to writers?

Megan is traveling in rarefied circles! A. O. Scott is one of my favorite movie critics.

Because it gives them an opportunity to critique society, I think.

She is indeed, George. The advantage of living in New York and having a Ph.D. I think.

And that was exactly what her first non-fiction book was about. THE STREET WAS MINE.

Interesting things you're sharing here. Thanks!