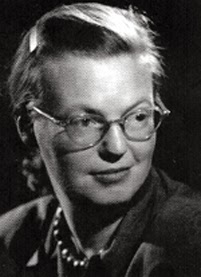 There is so much information about Shirley Jackson online that I won't burden you with it here. A very nice interview with her son and a reading of her story "Paranoia" appears in THE NEW YORKER. In brief Jackson died at age 48 after a life that was difficult in many ways. She was married to the critic, Stanley Hyman and had four kids. "The Lottery" must rank as one of the most- read short stories in the U.S. And THE HAUNTING OF HILL HOUSE stands at the top of most lists of American ghost stories.

Like most other American students, I'm sure, I was introduced to Shirley Jackson's work via her chilling story "The Lottery," surely one of the most famous American short stories every written.  This was probably the early 1960s.  In 1963 the brilliant adaptation of her The Haunting of Hill House was released (as The Haunting) and it remains (IMHO) one of the best adaptations and horror movies ever made.  When I eventually read the book I was even more impressed, especially with the casting of Julie Harris as the central character, Eleanor. I have since gone on to read and enjoy Jackson's collection of other short stories, but as I don't have the book at hand I don't really feel that I can write about it here.  I can write about my favorite of her books, however.
It was in the early 1970s when a friend recommended Life Among the Savages and Raising Demons, Jackson's two thinly-disguised memoirs about bringing up her three (later a fourth was born) children while running a household and taking care of a not very helpful husband in Vermont.  No one who has read of eldest son Laurie's adventures in school is likely to forget it.  The same goes for Jackson's attempts at learning to drive.  Apparently these were published first as separate stories in women's magazines like Good Housekeeping before Jackson edited them into a "novel" and published it in 1952, four short years after "The Lottery" came out and caused such an uproar.
If you only know Jackson from her most famous work and want to try something lighter, I would definitely recommend this one.  I recently picked up copies of both of her "memoirs" for rereading.
reviewed by Jeff Meyerson 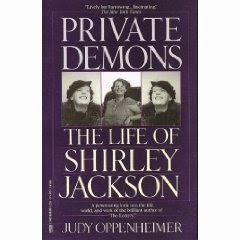 WE HAVE ALWAYS LIVED IN THE CASTLE. -

This is an amazing novel on my second reading, decades after my first. Its characters are few, they are pretty much nailed to one spot, and not much action takes places. Its high quality depends on Jackson's ability to create characters that speak and act like real people despite being essentially ghosts. You can easily see the mind that created both THE LOTTERY and THE HAUNTING OF HILL HOUSE in this novel. It was her last novel, written in 1962, three years after HILL HOUSE.

The writing in this novel is sublime. Jackson creates a world that is both seductive and frightening. I read this as a teenager but I think it takes an adult to appreciate what strong characters Jackson created.

Here's mine: Thorofare by Christopher Morley.

Please change the link by my name. I have my Shirley Jackson post up now:

Just an Ordinary Day, an anthology of unpublished work and some of her magazine short stories.

I didn't see the Shirley Jackson theme, but I did do an FFB, David Pinner's Ritual, the original spark for The Wicker Man.

I wonder what she would have written with another decade or two. A shame.