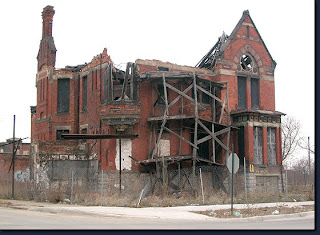 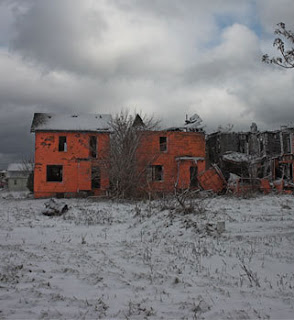 I bet you're thinking, my city has houses like this, but try four thousand of them. Imagine a city where until recently, there was not a working pharmacy, a movie theater, a decent grocery store.

In many ways, I’ve been hiding the real from you these past two months: showing you a via the city’s visitor’s bureau. I haven’t included recent headlines about: schools failing, casinos failing, the mayor failing, the infrastructure failing, the city government failing—a city in decline from top to bottom. This is a brief look at that , which hurts me to post although it's the only Detroit I've known since coming here in 1970 as a twenty-two year old.

began its downward spiral fifty years ago. Before the riots, before the attempts to bus kids to school, before it was clear Asia would rival in the car market, before all of those demonstrable, chartable things, began to fall apart.

After the war, was one of the first cities to experience suburban flight, fueled by racial tension that began with several riots during the 1940s. Between 1940 and 1960, the proportion of blacks in the population grew to one-third and the white middle-classes began their inexorable flight. By 1998, 78 percent of those living in the suburbs were white, while 79 percent of those in the inner city were black with vast disparities of income. Polarization in was the most exaggerated in the country. Today, one third of the entire city area lies derelict. Countless buildings have been demolished. Four thousand of those still standing are vacant and abandoned: locked, boarded and walled-up, waiting for their turn at implosion. Street signs are rusting away. Grass grows over the pavements. In certain places, the city looks almost rural, even attracting rural game and birds.

In spite of this, attempts at re-urbanization are being undertaken. is finally putting up affordable housing and rebuilding its downtown. New stadiums dominate the downtown. Strip malls, a curse in most areas, bring needed stores and jobs to the city. There is talk of a light rail system. A river walk now connects the riverfront downtown. But continuing improvement depends on an improved economy. Will that take place?

I have so much hope for Detriot. There's so much history there, and so many cool old buildings (even if most of them have fallen into decay.)

Maybe someday. When, or if, the city ends some 30 or more years of being run by incompetents. =P

So many people have failures to answer for.

When I first saw Roger and Me (Michael Moore) I thought, well, this is good, now there is attention, now people will fix things and Detroit will come back.

I was so wrong. Now, I worry about New Orleans in the same way.

How do the local, the state and the federal governments all get away with this neglect?

And here's my thing. It is correct to say Detroit began it's downward slide well before 1960. It was already being documented. So where were the politicians? Instead of preparing the region for change, like leaders should, like encourageing workers to take community college and college credits, encouraging literacy, discouraging sprawl and with that sewers and roads going to nowhere, draining Detroit, draining the inner-ring, instead of doing those things, the layer of political fat that stuck (and continues to) over this area was/is completely duplicitous. The short term positive jolt politicians get for standing with silver shovels and hard-hats (what are the helmets protecting anyway?)is more important than preparing and insuring a region's vitality. It's colder than survival of the fittest, the theory that explains what happened to Detroit.

Politicians do better in getting re-elected showing off the brights spots--as I have done--than admitting to decline. How often do we find Bush in New Orleans?

pattinase (abbott) said...
This comment has been removed by the author.
9:04 AM

Politicians do better in getting re-elected showing off the brights spots--as I have done--than admitting to decline. How often do we find Bush in New Orleans?

Patti: I'm here at my local lib. cause I have no Internet at home today. The place is jammed with computer users. The librarian tells me Mondays are always bad here because the library in the next town over is closed on Mondays! There's not enough money in the budget to keep that lib. open 6 days a week.

The gal also said starting in September this library system will be forced to close branches for entire days, not just cut back on hours like they have already.

Things are scary all over.... and how much money (not to mention lives) has George Bush wasted on the Iraq war?

Like Clair, I also have a lot of hope for Detroit. I visited for the first time last year and I drove by many of the houses Patti is talking about (locals told me not to stop, even for red lights), but still, even then, I couldn't help but feel this isn't over.

I talked with two guys who make the "World Class Detroiter" TV segments (forget their names, one white guy and one black guy - a TV news guy?) and they both said the biggest issue is race - black and white. How do you get past that?

I don't know, maybe it'll be the upside of the world hating America, Americans can finally unite. Or maybe Detroit will do like Toronto and diversify, dilute the race issue into a hundred different races so there's no clear majority and minority. That will bring different problems, but who knows.

One thing's for sure; answers, solutions, even ideas won't come from politicians - they never have.

I can only say that for all the growing pains, immigration has made Toronto a far better city than it was and continues to make it better.

Oh, that library thing is scary. I've heard of libraries being built that never opened their doors.
John, the legacy of slavery makes race a lethal issue. When people choose to come, it makes for a better mix.

Detroit has a lot in common with Glasgow - another industrial city struggling to get past the end of an industry that's also racially divided. In Glasgow it's Irish-British, or Protestant-Catholic and is probably most obvious in Rangers-Celtic games. But the city is coming through it.

I've been watching the terrific UK show "Life on Mars" which opens in present day, shiny new Manchester and goes back to 1973 - a city in total decay.

It canhappen to Detroit, too.

Thanks for the sobering and honest look at Detroit. The city's plight is sad even to someone like me who ahs never been there.

I had no idea Detroit has such a long history of decline. It sounds like there is a void in leadership just begging to be filled...sort of like the federal government.

We are about an hour from Cleveland, which has many scenes like those you have posted, and has the dubious distinction of being the poorest city in the country.
These are issues that politicos need to address. It is the spirit of the people that keeps things going.

I could have shown a hundred more pics like this. I was in Cleveland last year and it seem marginally better. But just.

How sad to see all these beautiful old buildings fall into decay and worse that it's allowed to continue. Thanks for sharing this.

It is especially sad since the architecture was something special.

Very sad photo of the houses but a very strong image.