My Town Monday: Made in Detroit by Paul Clemens 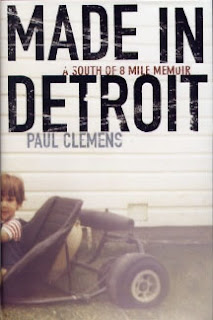 In 2005, Doubleday published Made in Detroit by Paul Clemens. It received excellent reviews and went on to be chosen a Notable Book of the Year by the New York Times.

The book details Clemens’ childhood growing up on the eastside of in the nineteen eighties in a city that was almost entirely black. His father worked in auto industry-related jobs, his mother mostly raised her children, taking the occasional housecleaning job in affluent suburbs. Clemens love for his parents shines through on every page. Listening to his account of his father's ability to shift gears without use of a clutch is a favorite section of the book for me.

The work also deals with the Coleman Young mayoral years, which Clemens faults with breeding an “us against them” mentality in the larger area. The book was brutally honest and beautifully written. Some readers found his picture of troubling, but he never claimed to speak to every experience, just his own.

Clemens went on to contribute several op-ed pieces to the New York Times and local papers. But with two children to support, Clemens continued working at his job as Assistant to the Dean of Liberal Arts and Sciences at . He wanted to be involved in the lives of his wife and children when he had a spare moment so the writing got put aside.

Last week, Paul was awarded a Guggenheim to our great joy. Hopefully, he will now have the opportunity to follow Made in Detroit up with another piece of writing. How often does a kid from a blue-collar, Catholic family without a Ph.D. get a Guggenheim? If you haven't read Made in Detroit, it's worth looking for. It's sad, funny, frustrating and authentic, just like Detroit.

Patti: Sounds like this guy's got some serious writing chops, especially to get recognition from the NY Times. He was in the same position a lot of writers face - havng the responsibilities of life interfere with writing time - kudos to him for earning that grant. I'll put his memoir on my TBR pile.

My grad school advisor is from 8 Mile - so I learned a lot about the neighborhood and what it does to its residents from him. Tough place.

Fingers crossed for him to get a leave to take advantage of the Guggenheim.

I hope they do cut him a break so that he can take advantage of that award.

Patti, are you participating in My Town Book Club Day - May 12?

Sounds interesting, although I must say that my brain just abhors anything urban, anything "city" these days. I'm afraid trying to read that book would be as much of a struggle for me as losing 100 lbs. I'll keep it in mind, however!

Well this won't change your mind. At least, not about Detroit.

Oh - great post!! I love reading books like this.
I just finished (fiction, but oh so real) Stormy Weather by Paulette Jiles. Set in the depression, it was absolutely uplifting.
:-)

Sounds like a good read. I'll have to look for it.

I'll look that one up, Sam. Thanks.