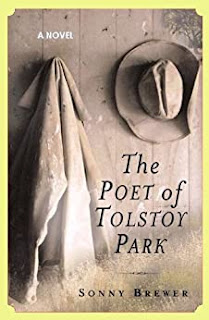 Henry Stuart is a sixty-seven year retired professor living in Idaho when he is diagnosed with tuberculosis, a disease the doctor tells him will kill him within a year. A widower with two adult sons, he decides to go live in a more temperate climate and chooses Alabama. The novel is set in the 1920s and his only means of travel is a long train trip. He arrives in Fairhope, AL four days later. He has purchased ten acres sight unseen and lives in the barn while he decides what to do about a permanent home.

Much of this book describes how Henry builds his house. And how he gives up things like reading to make  himself tougher. There is a lot of Thoreau in Henry Stuart. The reader also gets a lot of philosophizing and very exacting accounts of how he fixes things and how he builds that house. We meet his neighbors although not enough to feel we really know them. Our time with them too often reminds of stock scenes from Little House on the Prairie or The Waltons.

This novel is somewhat based on a true story although the real Henry was called the Philosopher of Tolstoy Park rather than the Poet. There is much discussion about Tolstoy.

I feel pretty ambivalent about this book. I like the idea of trying to live simply, but don't understand why Henry insists on being a hermit for much of the book. Is it just to emulate Thoreau? Why does he give up reading and writing and focus solely on his tasks and nature. I think you need to be an especially gifted writer to make this sort of book work. And I am not sure Sonny Brewer is so blessed. But I am not sorry to have read it. There was enough here to make it worth my while.

I have never heard of this book or the author. I must admit it doesn't sound too appealing to me. Especially after the reference to stock characters out of Little House on the Prairie and The Waltons. Two shows I detest.

Perhaps I am being too harsh. Maybe they are a good reflection of small town people. The butcher, the baker, etc.

I'm not familiar with the writer or the book. Sometimes you take a chance on an unknown work or author and it doesn't work out.

It was a book club book.

I don't think I could make it in a book club. There are too many books I KNOW I want to read to take many chances. I do take a flyer now and then and I can deal with the outcome. But I don't want to deal with the outcome of someone else's chances. But I do admire the courage of people who are willing to do that.

It sounds like it could've been the context of an excellent novel about reflection, growth, acceptance of death, living simply, etc., Patti. But I agree about all of those 'whys.' I like to have a clear understanding of the characters I read about, if that makes sense.

pattinase (abbott) said...
This comment has been removed by the author.
9:49 AM