Not quite finished this history, but it is long. And really great. If you are interested in Hollywood in the forties, this is the one to read. It begins with the influx of talent (composers, directors, actors) flooding into the country following Hitler's aggression in Europe in '39 and follows the story up to the Cold War, the McCarthy Hearings, etc.
It is not a celebrity gossip book although there are lots of juicy stories in it. It details the union struggles, the writers who came seeking a paycheck they could count on (Faulkner, Dreiser, Hemingway, etc) the composers whose talent was extremely misunderstood by the studios, how the war affected both the content and cast of Hollywood, the goofiness of many of the studio chiefs in handling and mishandling talent.
City of Nets is the work of a gifted historian and writer. Highly recommended 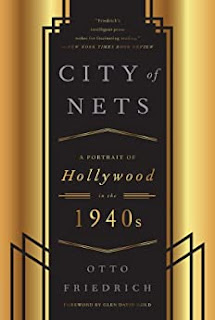 I read this when kit first come out and loved it. I'm a sucker for well written books about the movies and this is one of the best.

Oh, this does sound good, Patti. And sometimes, a long book can really draw you in. And there is something about Hollywood at that time, isn't there?

This sounds great! I'll track down a copy.

It is one of the best because he is a trained historian and he is not just looking for gossipy information. He really pulls and times and figures together.

I was surprised to see my library has an ebook copy available to download, but haven't taken it out because I have other books on hand and I doubt I could read it in three weeks unless I put everything else aside.

I bought this for more than that through a private site on amazon. It is a little warped but easily readable. I am always worried it will smell like cigarette smoke when I order that way.

So true. For the years we belonged to the Paperback Swap site, one thing almost everyone wrote was "no books from smoking household" or something like that. I had a good friend years ago who often loaned me books and VHS tapes (this in the '80s, mostly). He smoked like a fiend (it contributed mightily to his death at 52) and his books did tend to smell of it.

This sounds like something I'd love to read, and I just checked to see if my so-called library has it. They have one copy and it's checked in, which is not much help since the incompetent idiots who run the place seem to have no intention, or even any desire, to reopen. I read a very favorable review of a new book on basically the same subject, although I think it was exclusively concerned with German filmmakers. Pretty sure the review was in The New Yorker. I'll plow through some recent issues and see if I can find it.

You've read his history of THE SATURDAY EVENING POST and Curtis Publishing sometime over the years, I imagine...