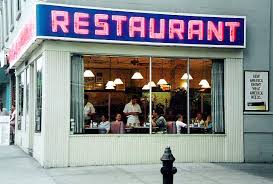 As a teenager, I hung out at a place I believe was called Baker's and it was pretty much the same place you saw on Happy Days called Arnold's. As an adult, we have had favorite restaurants to a point but none were as important to me as that soda shop. Did you have a place like Baker's.

I guess this post would mostly be about TV restaurants though. Luke's Diner from Gilmore Girls popped up in Detroit this week. It's popping up all over to get people excited about the return of the show on Netflix.

What fictional restaurant would you like to walk into? There have been a lot when you think of it because it's a good way of getting characters together. Arnolds from Happy Days, Cheers from Cheers, Mel's Diner where Alice and Flo worked on Alice, Roseanne's restaurant on Roseanne, Central Perk on Friends, Archie Bunkers's Place, and so many more.

I'll take Monk's Cafe on Seinfeld, which is really Tom's. How about you?Also did/do you have a favorite place to go?
Posted by pattinase (abbott) at 7:30 AM

I think I would get a kick and half out of visiting that soup joint run by the Soup Nazi on Seinfeld. In Milwaukee there's a real place called Soup Otzie's run be a very lovely woman (so we are told) and not a militant jerk. Have yet to visit the real place.

I don't really pay attention to the places in TV shows. The characters and the story are more important to me.

You couldn't drag me into the Central Perk any mire than you could make me watch FRIENDS.

I don't hang out in bars - never have - so Cheers is out.

I'd go to Rosie's where Kinsey and the gang hang. Some of the food described sounds good too.

I only pay attention to a place when it takes on the import of a character or describes them in some way. FRIENDS was so anchored in the coffee house mentality of that nineties coffee shop. Same with Frasier and Niles in Seattle. And Seinfeld would like a diner like that one. I can't imagine ever stepping into Archie's Place. So dreary.

Ah, Nancy. Now I get it. I have read a lot of Sue Grafton but not in many years so it didn't ring a bell. Making a restaurant resonate in a book is more difficult, I imagine. I used a lot of restaurants in SHOT IN DETROIT but not the same one enough to make much impression.

It might not be a restaurant -- such a limited menu -- but I would have enjoyed coffee every now and then with Frasier and Niles Crane. Such loveable snobs!

Mel's Drive-In from the movie American Graffiti, which was very much like Bob'sthat I went to when I was in high school. Also, the Bistro in Three Pines in the Louise Penny books.

"The Red Onion" in The Road to Wellville, probably the only place in town where a person could actually eat meat, and the "Big Belly Burgers" chain in the DC Comics Universe. Characters from The Flash and Arrow eat there.

We briefly (or at least Alice and I only infrequently visited, while this was so) had a diner where the waitstaff were uniformly gorgeous young Russian emigre women, and rather like the situation on SEINFELD in one episode, they were all family. The diner has since changed ownership, and the food is a bit worse, too. Sic transit.

Fictional eatery: the bar in DR. KATZ, PROFESSIONAL THERAPIST, though perhaps only because of a media crush on the proprietor. The luncheonette proprietors on BECKER might well do, for similar reasons. And, of course, the eventual espresso bar in My Sister's Place in ONCE AND AGAIN.

My Sister's Bookstore, that was.

Just hope you're not the guest of honour at Sbirro's, from Stanley Ellin's The Specialty of the House...

I very rarely drive over to Milwaukee but will try and keep Soup Otzie's in mind.

The diner in TWIN PEAKS is supposed to have great pie and coffee.

I'd really like to visit Moe's from THE SIMPSONS. Come to think of it, I've never been to Moe's here in my own town. https://www.tripadvisor.com/Restaurant_Review-g60023-d4630860-Reviews-Moe_s_Place-Lake_Mills_Wisconsin.html