Ed McBain week is on October 2th. I have chose ME AND HITCH, not that I lay sole claim to it.

The So Blue Marble Dorothy B.Hughes(reviewed by Ed Gorman) 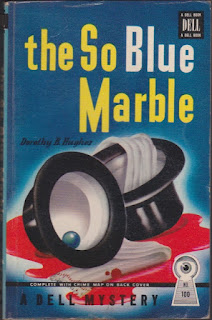 I'm not sure exactly when Freud became an influence on popular culture but certainly in the Thirties and Forties his beliefs could be found in crime fiction and crime movies everywhere. Hitchcock sanctified him in Spellbound and many lesser directors followed suit.

One of the most prominent of Freudian tropes was phantasmagoria, the sense that the protagonist is lost in a chaos that may or may not be real. A nightmare or is he really about to die?

Dorothy B. Hughes certainly plays with this trope in her famous novel The So-Blue Marble (1940). Her lovely protagonist, saddled with the unlovely name Griselda, decides to visit New York and stay in her ex-husband's apartment, at his request. They haven't seen each other for four years during which he's become a major reporter for NBC worldwide and she's become both a writer and an unlikely (and unhappy) movie actress.

This is the Vogue magazine world just before the war. Everything is ridiculously expensive, everything ridiculously elegant, people, clothes, cars, apartments alike. There are always limos standing by and champagne to drink.

Griselda is accosted in chapter one by a pair of diabolocially handsome twin brothers, one blond one dark haired, called the Montefierrow Twins by everybody who knows them. They are most frequently  seen in tops hats, tails and carrying gold-handled canes, one of which has a dagger on its tip. In any kind of company other than their international che-che world these two would be dead in under five minutes.

The lads want a blue marble that they believe Griselda has. This is the McGuffin. A lot of people want the marble. Only the twins are willing to kill for it, something they do frequently. The marble isn't just a marble of course and there are hints that spies from three different countries have been searching for it, too.

The phantasmagoric aspect comes in when you realize that at times the story teeters on the brink of being unbelievable. It really does have the quality of a nightmare. The writing and social observation are so well done--Hughes, a Yale Young Poet in those days, obviously knew this turf well--you're swept up in all the calamity without worrying about some of the stranger twists and turns.

The most interesting character in the book is Missy, Grisedla's seductive sixteen year old sister. A true psychopath and the lover of one of the those god awful twins. Humbert Humbert would no doubt find her enchanting. Few writers have ever been able to create terror as well as Hughes and Missy is borne of that terror, another unsettling element play off again the real world.  To me it's clear that she dutifully read her Elizabeth Sanxay Holding and learned great deal from the experience.

This is the novel that set Dorothy B. Hughes on a career that would include two of her novels becoming Bogart pictures, the best of which, In A Lonely Place, is a noir icon. This is a swift, tart, dark novel set in the months before Pearl Harbor. The coming war is felt on every page. 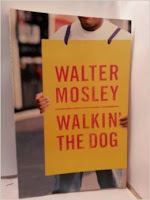 Jeff Meyerson was a member of DAPA-EM for over 30 years and published an early fanzine in pre-computer days called (way before the bookstore/publisher of the same name existed) The Poisoned Pen. I was a mail order book dealer, specializing in secondhand British mystery and detective fiction. I've read thousands of mysteries since 1970.

I'm going to do MOTHERS AND DAUGHTERS by Evan Hunter for Ed McBain day. Since, unlike Patti, I'm not the blog hostess, I can't lay sole claim to the title.

Freud was good for literature, not so good for the science of psychology

I am trying to figure out what do do about McBain. I like his books and have not read one of his in quite some time. I am also buried in books so it seems wrong to just go off and deliberately read something for fun to fill the deal here.

And now I see Prather is a January deal thanks to Barry who has been pushing me to read his stuff. I sense a plot was afoot on his part.

Kevin-you should just read what you want to read/or have to read. There are always people that don't read the featured author. No big deal.

Anyone who wants to join me with ME AND HITCH is welcome. Sometimes two looks at the same book proves fun and valuable.

I know, Patti, and I have done that before. I just would like to participate on the featured author. Just don't know if it makes sense to do so.

I'm back and my post is up for today:

Cruel as a Cat by Kyle Hunt

Mine's up and in, as well...thanks, Patti!
THE STARCHED BLUE SKY OF SPAIN by Josephine Herbst (HarperCollins 1991)

The Thackery Phin novels by John Sladek are really, really good. Entertaining throughout, with some of the most outrageous - but convincing! - locked room gimmicks.

I've just downloaded The Last Best Hope for Ed McBain week. Haven't read anything by him in a while. Looking forward to it.

In my one conversation with Douglas Adams, I tried to convince him he should look into the work of John Sladek...but he jokingly refused, and not long after, he unexpectedly died. Don't make his mistake!

Both of Sladek's Thackery Phin novels are a lot of fun, especially for those like me who love impossible crime stories, and I wish he'd written more of them.

Mathew, The Last Best Hope is one I think you'll enjoy.

Yes, Kevin, like Baldrick on Blackadder, I had a cunning plan to get you to finally read a Prather novel. Like all of Baldrick's plans, it's far from infallible, but I had to try. I hope you'll read one, but if you can't for any reason, you can't, and so be it, amigo.

Not so sure, Barry. I read a couple chapters of Best Hope last nite, and it struck me as being close to parody if not parody itself. Not at all like the 87th Precincts I read some years back. As I would rather say nothing about a book than pan it in print I might just pass over Hope and read another 87th. I know Hunter/McBain is a master--a phenomenon, in fact--and would like to contribute something positive to the project. Then again, Hope just might surprise me.

I finished La Fountaine's The Last Walk yesterday--a stunning novel. (Maybe the contrast between the two styles threw me.) It annoys me that in awarding the 1987 PEN award for best regional fiction, whoever wrote the citation called it a "better than average melodrama." All that tells me is that PEN held its nose in recognizing a novel strong with story rather than the high holy literary tropes fasionable at the time. Phooey on that, phooey on them for that.