The 1950s was a rich era for crime fiction. Edgars were given for best first novel beginning in 1946. It was not until 1954 that the best novel category began. And look at the first selections! At least four of these first five are considered classics of the genre 60 years later.
And I am happy that right from the start, women writers were recognized in this field.


In 1953 Ira Levin won best first novel for A KISS BEFORE DYING.(Patti Abbott)

Bud Corliss, like many protagonists in books such as this one, yearns for the good life that his blue-collar origin seems to prohibit. He possesses good looks and the skills of a sociopath. In the war, he also learns he has the ability to murder with no regrets.

Using the GI Bill, he returns home and enrolls in college where he meets the daughter of a tycoon and impregnates her. Believing this will sully him with her rich father, he murders her after tricking her into writing a suicide note.

Next Corliss pursues Dorothy's sister, Ellen. The romance goes well until Ellen begins to probe into Dorothy's death, convinced her sister did not kill herself.  Ellen uncovers the truth and confronts him. Corliss confesses to the crime and kills Ellen. Unfazed by this setback, Corliss courts the last remaining Kingship daughter, Marion. This affair is the most successful; Corliss sweeps her off her feet and charms her father, and soon he and Marion are engaged.

Local college DJ Gordon Gant begins investigating the case, and is immediately suspicious of Corliss. He breaks into Corliss' childhood home and steals a written plan for meeting and seducing Marion to get her family's money, as well as news clippings about Dorothy's and Ellen's deaths. Days before the wedding, he shows up at the Kingship family home and presents Marion and her father with the evidence of Corliss' deception.

On a trip to one of the family's copper manufacturing plants, Marion, her father and Gant all corner Corliss while he is standing over a vat of molten copper and threaten to expose him. Corliss frantically pleads his innocence, but his accusers are unmoved. Realizing his luck has finally run out, Corliss panics and wets his pants — just as the Japanese soldier, his symbol of pathetic cowardice, had done. Delirious with fear and shame, Corliss stumbles and falls to his death into the vat below.

There is a touch of AN AMERICAN TRAGEDY in this book, of course, but Levin, by taking it farther in audacity, is able to overcome the familiarity of the story of a poor boy yearning for marriage to a rich girl. Corliss is less redeemable and the plot is twistier.

As a huge Ira Levin fan I read this probably in the early seventies. I put off seeing the film with Richard Wagner for years, feeling he could not bring justice to the role.I was wrong. When I finally saw it, he was perfect as a sociopath. I won't give my thoughts on why that may have been. The next film, with Matt Dillon, was good enough too.The source material is strong enough for any number of remakes. But the novel itself is best of all.

Levin went on to write several great novels. Truly one of my favorite novelists-especially in ROSEMARY'S BABY and THIS PERFECT DAY. But all of his books are terrific. And this is such a worthy Edgar win.

I know the date on this is 2012 but this collection of 25 very noir stories all date in their original publication from 1951-1959.  They are dark and bleak, stories of weak men and adulterous women in steamy Florida.  Stories like "It's Always Too Late" and "My Lady is a Tramp" tell you almost all you need to know about them in the title.  The story that blew my mind (to use a phrase from my own youth) was "Moonshine" (originally published in Manhunt in 1955).  (SPOILER ALERT FOR PLOT HERE)  A guy comes home and catches his wife with her boyfriend and has to decide which one of them to kill.  After following the boyfriend and disposing of him he returns home only to find his wife with another guy.  The ending of this one absolutely floored me.  (END WARNING)

Despite how the review sounds, the book is definitely worth your time.  If you like noir I'd recommend it. 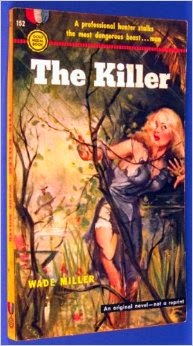 Wade Miller was of course Bob Wade and Bill Miller. They collaborated on a few dozen novels until Miller died of a heart attack in the office they shared. He was forty-one.

Thank you, Patti. I now know more about 50s crime fiction than before.

I did not follow the theme as I have not been mindful of the meme for some time and did one at random of a book I nabbed in Oxfam: Mad World.

I have nothing. I used up my 1950s over the past couple weeks.

Thanks for these, Patti! Just an FYI, the Mary Stewart book was published in 1958. What a great decade!

[Pulls THE KILLER from his bookshelf, puts on top of To Be Read pile]

I loved Margaret Millar's book, Beat in View. Plan to read more of her works in future.