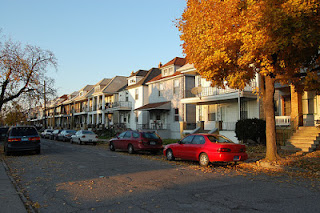 Michael Davis started Hamtown Farms, a paw-paw farm in the city of Hamtramck, after a eating a strange-tasting fruit with an equally strange name called a paw-paw. The fruit, which is native to Michigan, tasted like a delicious blend of mango and bananas; soft, ripe and sweet. He says, "It was a flavor I have never had before. It is creamy, almost like a pudding."

Hamtramck is a city that sits within the city of Detroit. It was traditionally a Polish neighborhood but is now home to a variety of ethnic groups.

A  resident of Hamtramck, Davis had witnessed his neighborhood struggle with blight and vacancy. He saw his block bookended by empty, trash-peppered lots and lamented the tragic pall they cast over the community. He had advocated for a pumpkin patch, something to fill up the empty space, but there were challenges that saw that idea deflate. So for awhile Davis’s view during his daily commute was marred by those empty lots. Then came the paw-paw.

Last year on June 9, Hamtown Farms was founded with 100 volunteers  changing what it was into something beautiful and necessary – their arms bared to their shoulders from rolled sleeves; planting, prepping and tarping the land. When they were finished vacant land had become the home of 13 paw-paw trees, eight pear and cherry trees and 30 hazelnut bushes.

Davis started the farm along with Julie Swartz, Jeffrey Taylor and Robert Swartz. The community – kids, adults, neighbors, everyone – is why Davis and his cohort started the farm. It wasn’t because of paw-paws, because admittedly Davis knew little about them at the beginning; rather it was to band the community together. To this end Davis and company engaged as many people in the process as they could. There was dinner with the mayor, meetings with the city economic development manager, meetings with the neighbors and the community. Davis says, "Instead of imposing our desire on the community, we listened and adjusted our plans. The master plan itself was revised 25 times due to community input." What Davis calls "listening" was a two-year process to develop a master plan for the farm. The farm’s leadership team worked closely with the city of Hamtramck and other organizations with specializations in farming and paw-paws.

The farm currently reflects this intentioned planning. Davis says, "In the center of the site there are raised beds for community members to grow their own seasonal vegetables. Leftover beds are planted with vegetables and are marked with ‘Public Picking Allowed’ signs."

The community of people interested in supporting the farm extended beyond the immediate community and city government. There were others who responded materially to the vision of Hamtown Farms.

Davis says, "We received a $4,000 grant from Constellation Energy as well as a $500 donation from Ted Nelson of Wellcom. These funds were quite helpful in the startup phase, allowing us to buy materials to build and fill the raised beds."

Some of their other benefactors have been unexpected. "Some people have just walked up while we’re out on the farm and handed us cash saying, ‘Keep up the good work!'" Davis says. In the summertime, ice cream is frequently pressed unto Davis by local vendors, as thanks for the work he is doing.

Davis is deferential when mentioning the help provided by the City of Hamtramck. He also acknowledges with appreciation the "vast network of support within Detroit," naming supportive people and organizations that have helped Hamtown Farms happen: Mitch Cope/Design 99, The Greening of Detroit’s Garden Resource Program, People’s Community Services.

Hamtown Farms is not a fairy tale; it is a story that continues. When the winter leaves us in a couple months, Davis and others will go back to work. "We’ll head out and pick up garbage that has blown onto the lots." In the spring, when planting season starts, the neighborhood kids will come out and join the work, chattering excitedly. For Davis the reward is the farm’s existence and its practical benefit to the community; this new reality that at the end of their block sits a farm and not a blank space.


I have never had a paw paw but I will seek them out when the season changes (if it ever does!)
Posted by pattinase (abbott) at 8:00 AM

Patti - How cool! I've never heard of a paw paw farm. And it's good to know this kind of life and growth is happening in Detroit.

Both Mark Binelli's DETROIT CITY IS THE PLACE TO BE and Charlie LeDuff's DETROIT: AN AMERICAN AUTOPSY mention the farming movement in Detroit. There are some small farming operations springing up in Buffalo, too.

We sang a song about "picking up paw paws" in camp.