I am thinking Ray Bradbury for our next author. Perhaps on December 7th. Maybe some people can do a short story or two in lieu of a novel. Or a work of non-fiction or a critical look at him. What do you think?

Ed Gorman is the author of the Dev Conrad series of political thrillers and the Sam McCain series. You can find him right here. 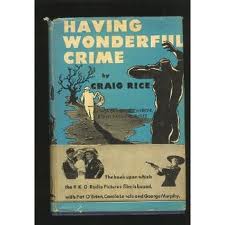 I just finished reading Craig Rice's 1944 novel Having Wonderful Crime. Rice is, of course, the grand dame of mystery mixed with screwball comedy. I hadn't read the novel in thirty years so I came to it fresh. And I was surprised.

Yes, it's larky in its plotting, and as usual smart-ass in its dialogue but there are moments that are serious and amazing.

As an alcoholic, I became all too familiar with blackouts and hangovers that kept me in bed for two and three days. Rice opens the book with a long scene involving a man who lacks the strength to get out of bed. He is beseiged by the furies and terrified of what he might have done. This is one of the most powerful morning-after scenes I've ever read. I think most alcoholics would agree with me. And Rice, a terrible alcoholic herself, knew what she was writing about first hand.

Then there's part of a scene in which Rice (using interior monologue) assess a room full of glamorous people and their worth on the glitz scale. Her observations are worthy of Tom Wolfe at his best and nastiest.

This book makes a good case for what we call today the traditional mystery. It's a pleasure to read as pure entertainment but there's a also a wicked social voice relating the reality of this particular time and this particular strata of society. Despite her reputation, I don't think she's hardboiled. At least not in this book. She's just a very good storyeller reporting back from the eyries of the wealthy and privileged. And laughing up her silk sleeve. 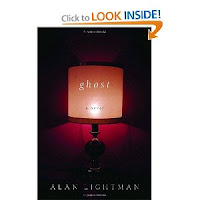 I am reluctant to review a book I can't quite recommend but since I read it with this purpose in mind, here it is. Seemed like a good choice for this time of year. Those of you who like metaphysics might enjoy it however.
David is a man who is adrift in life, not as disastrously as Quell in THE MASTER, but similarly. He takes a job with a man even stranger than he who is a mortician. David shows an aptitude for dealing with the clients and is soon a fixture in the business. Then one day he makes the mistake of talking about a vapor he saw rising from a body. His explanation of what he saw is never more concrete (if vapor even can be) than this. A vapor with the suggestion of an intelligence is as far as he goes. He is immediately picked up by all sorts of crackpots and a paranormal society (gee, this really does evoke THE MASTER) and his divorced wife briefly returns, believing him to be more interesting than she had thought. Everyone thinks his experience has something to offer them, except David. He remains as enigmatic by the book's end as at its beginning.Maybe the vapor is a manifestation of David's personality.

A strange little book that is almost as difficult to explain as that puff of vapor. Lightman is also the author of EINSTEIN'S DREAMS, a much praised book

I'm up for Ray Bradbury. Oddly enough I posted about him earlier this week.

Thanks as ever for the link and round-up, Patti!

Bradbury for sure. What a writer. A favorite of mine, and an early influence on my work.

I have an entry today: Wind of Destiny by Sara Lindsay Coleman.

I very much enjoyed Einstein's Dreams by Lightman. I did not, however, like his second book Good Benito which attempted to be a novel but failed miserably due to Lightman's preference for vignettes and sketches. I've avoided everything else he's ever written. Einstein's Dreams was turned into an imaginative theater peice several years ago by a Chicago theater company the name of which escpaes me. But I'm sure you can find out through the miracle of Google.

I'll always join in on any author tribute. What about a forgotten children's book event sometime? Or volume of short stories?

We did one early on. Also did non-fiction and a few others. But I think it is time to do one again. That will come after Ray.

And certainly Bradbury lends himself to both of those...

I recently read one of his short story collections (A Memory of Murder) as well as a few other stories. Good choice.