SPECIAL NOTE:
Last Friday in November, special edition: Canadian Books. (For those who care to read one, of course. Any review is always welcome).
Here is the site for the Crime Writers of Canada if you'd like to review a crime novel.

Ed Gorman is the author of Bad Moon Rising and other fine novels. You can find him here.


Shooting Star and Spiderweb by Robert Bloch
Though Robert Bloch made his reputation with horror or horrorific stories and novels, he worked steadily throughout his career in the mystery and crime genres. Shooting St 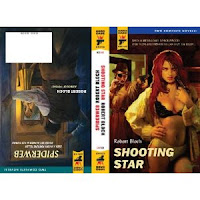 ar, one half of the new Hardcase Crime double book (more of these please), is not only crimonious it's also set in Hollywood, one of Bloch's abiding fascinations.
The hook here is novel for those of us who can remember how actor William Boyd bought up all his Hopalong Cassiday movies when they fell from popularity in the Forties and later sold them to TV. Buy low sell high. They brought him millions. Failed literary agent Mark Clayburn, now paying the bills as a private eye, is hired to prove that a Boyd-like actor wasn't the decadent man the press revealed him to be following his murder. The man who hires Clayburn bought up the dead star's Hoppy-like movies and expected to make a fortune. But since the films are aimed at kids...who wants to see a hero whose tastes off-screen were, to be gentle about it, sleazy.
In Spiderweb failed actor Eddie Haines is hired to be a "psychiatric consultant" to the stars by a rather arch villain named Professor Hermann. By blackmailing Eddie, Hermann has found the perfect tool for his racket. There are moments that reminded me of Nightmare Alley throughout the book and more than a few scenes that move the novel into the kind of realistic horror of Psycho. Shooting Star is driven by its mystery storyline; Spiderweb, though the storyline is less focused, depends on shock material to keep you turning the pages.
Neither of these novels is major Bloch but both deserve reading. For one thing they encapsulate a number of the obsessions, sociologically, of the Fifties. For another we see the dark side of Bloch's obsession with Hollywood. In such masterpieces as his short story The Movie People we see his almost innocent sense of what the movies gave to him as a youth. When he speaks of Chaplin and Keaton and Lloyd it's as if he's speaking of secular saints. The movies of his boyhood are holy to him.
In these novels and many short stories he deals with the business side of Hollywood. The voice becomes by turns sardonic and angry as he witnesses the passion and beauty of the great films and film artists reduced to power plays and dishonest deals rendered by men who have no idea what they're defiling.
I enjoyed both of these books enormously.

A bit late in the day (for me anyway) I got a book up, Flann O'Brien's The Best of Myles: quintessentially Irish.

I've got mine up today as well, Patti. GREEN FOR DANGER by Christianna Brand. Now I'm checking to see what everyone else wrote about.

Just put mine up: PROTECT AND DEFEND by Jack Valenti (ghost-written by Max Allan Collins).

And mine, which Blogspot discarded without potential for recovery, had to be reconstructed, is back up, but Blogspot doesn't want to recognize that.

Yeah, but everyone who has a chronological linkset for other blogs won't have it in their queue. Very annoying, if less so than the discard and lack of recovery.

And no tally of hits. Blogspot is dreamy and easily confused. (And further griping. Eh, how much did I pay for it...well, in time, some...)

Very sorry for being so late today. But, I do have a good reason because I now have legal representation for my social security disability case.

My book selection is DICE ANGEL by Brian Rouff.

Another good day, thanks for doing the work, Patti.

First time in a while I've been able to look at each post.