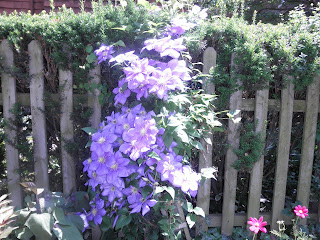 I got this idea from Martin Edwards blog on the topic of a La Ronde (round), but I think it would work as a great flash fiction challenge.

The theme is jealousy. I'll write the first 1000ish words that plays on a theme: a story about a character who is jealous of someone else.

The next writer writes centers their story on the person my character is jealous of and the object of his/her jealousy. The reason for the jealousy would, of course, be different in every story.

I'd say we could take a week between segments. Every Tuesday then? Does this seem do-able to you? If so, let me know. Of course, we couldn't knock off our nemesis's (?) but certainly they can be less than respectable citizens. Or murders other than that of the protagonist can take place.

My story will be set in the past so you can stay in that era or take it forward. The protagonist from the previous story is left behind each time. The next story is about the envied one. Am I making myself clear? Sometime I'm not sure.

If I get at least eight or so players, I can start this on October 5, with a story each Tuesday. What do you think? I don't see why it has to be limited to any number of writers. We can go on till everyone gets theirs up. But let's say I need your name by September 26th to post a schedule.

Let me know if you're in by the 26th and also if you can do one pretty quickly (like on October 12th or 19th) or if you need more time. You will only have one week to write the story regardless. I will make up a list of dates and post it. In or out?
Posted by pattinase (abbott) at 9:00 AM

Patti - What a creative, great idea! I'm not going to put my name in, because I'm not certain I could get something decent together in time to play, but I am excited about reading everyone's stories. Thanks for thinking of and being willing to organize this.

October is going to be a deadline month for me so I wouldn't be able to participate. I'll follow the work though.

Hi Patti. Is there a minimum and maximum word count, with you saying you'd do the first 1000ish?

No minimum. One thousand words or thereabouts at maximum. Yes, I will do the first flash.

I could do anytime, so feel free to throw me in and give me a date. If I have to choose, the sooner the better (12th or 19th). I have finally figured out that my schedule is always madness and that's not going to change and the illusion that things will somehow slow down "later" is just that: an illusion.

You'll remind me, right? I'm hopeless without a deadline in my computer(s).

I sure wish I could write, this sounds like great fun. I'm eager to read the stories!

Provided I get more than two people willing to try it. Sometimes I get 30 and sometimes 2. This may be a 2 story.

Sounds like wicked fun. I'm in. Plug me in wherever you need me.

I'd love to play! And read...can't imagine what everyone will come up with.

And our number grows!

I'll give it a shot. Where/whenever you want me. Sounds like great fun.

I'll give it a go. It'll either ping across the Atlantic, or I'll relocate! Jealousy/envy shouldn't be a problem, I'll probably have that feeling for the writing that preceeded my turn.

Thanks, Rob. Be interesting to have an Englishman step into the mix.

Sounds fascinating Patti. Count me in. So will it be pairs of stories all started by you and finished by others or will it continue out to a longer piece? But you'll be doing each first 1000 or pairing up people?
Either way, I'll do it. I'm surely too busy but what the hell. I'll sleep when I'm dead. Maybe put me in a later slot if possible.

The second writer writes an entirely new story about the person my character was jealous of (Y) and the object of his jealousy (Z). And so on.

This is what Martin wrote on his blog.

"There are eight sections in the book. It begins with a tramp feeling a pang of jealousy when he spots someone with a more settled domestic life. We then see that someone in close-up, and find that he envies someone else, who in turn,... well, you get the picture."

I guess what would make sense would be for me to take the last scenario and bring it back to X.

So each story is completely different except that one character comes from the story before that one.

Looking forward to it!

I guess I'll toss my hat into the mix, Patti. It sounds like fun.

Four men and four women. I'll try to make a schedule that alternates and send you a list.

Let me know when you want me, if you need a story.

Sure, Dana. Will make up a schedule and email it.

Let me know if you see this:

My flash piece will be about a male teacher jealous of his more charimatic colleage so Dana's main character will be that charismatic guy who will be jealous of a third person. And so on.

Cool. Are you leaving sign-ups open until the 26th? More folks may want in, and I was figuring on posting a reminder on Saturday.

And I'm curious about K.A.'s point. For story purposes, are we considering jealousy and extreme envy to be pretty much synonymous?

The more the merrier. I think

I guess what we want is extreme resentment about someone else's success, possession, personality. I'm not sure I can separate the two enough. But on Martin's blog, he used the word jealous.

11/2 fine for me. The concept reminds a bit of David Mitchell's Ghostwritten, where each chapter is set in a different city in the world, but the main character in each city is linked in some way to the main character in the previous chapter (a chain of one degrees of separation at the global level). This will be a one degree of separation story in the form of an Ouroboros (the serpent that swallows its own tail), in that it rings round back to the start if Patti writes the start and end pieces. Should be fun.

Your will be the challenge--to bring the character overseas. Or perhaps he can be waylaid in the States due to a volcanic eruption

patti, i'll be in if you need me. it's such a good idea that i'd hate to see it go to waste. i'd rather be later than sooner as well,but if you need an earlier effort, i'll go with that.
and a little shout here for Sea Minor - Martin Edwards will be Dancing With Himself very soon.

I love this kind of challenge. I'm in.

If there is still room, I'd love to join in.