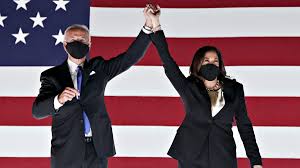 Once upon a time, the coronation of a new king took place in the kingdom. Everyone woke as if for the first time in many years. The people rubbed their eyes, seeing clearly the consequences of the old king's bad behavior. The sky was less clear, the water more foul, the people were sick, the bile of hatred was still in their mouths. Their eyes filled with tears.

But they put on their masks and waved to their neighbors black and white, sick and well, rich and poor, old and young--all of whom they loved.  And the streets were filled with their dancing and singing and each knew a better day had dawned.

The new king and his helpmate rejoiced in what they saw from the castle window and vowed to do only good in the world.

And the people of the kingdom lived happily ever after.

It's here at last.

So hope he can't wiggle out of it all.

I'm afraid the Trumpsters who drank the cool-aid will not just go away, so it will be a rough path to serenity.

But the old king and his cohorts remained hidden in a dark bunker in the castle and refused to leave. "No prob," said the new king, as he closed the door to the bunker and locked it...forever.

I do feel 100% better than I did one week ago at this time. After a week of anxiety, I am thinking I will be able to sleep better now.

Yes, Jerry. And yes, TracyK. I think we will sleep better and not feel such shame.