Rewatched all three of these films in the last week and all three were terrific. Hollywood knew how to make movies for large audiences that weren't about superheroes then. This sort of movie would come out of independent film companies nowadays and wouldn't be as lush as these three were. Daniel Day Lewis is amazing in both of the ones he is in, playing such different parts. Winona Ryder is so much better than I remembered her.
I always remember the first 20 minutes or so of Three Days of the Condor, but the whole film is brimming with tension and great scenes. Redford and Van Sydow in an elevator is amazing.
A Room with a View is so much quirkier, with so many unexpected moments than I remembered. And what a cast. I was shocked when I checked IMDB that Denhom Elliott has died thirty years ago. I could swear I saw him more recently than that. Helena Bonham Carter is just twenty in this part and already an accomplished actor.
What movie when you rewatched it held up surprisingly well? 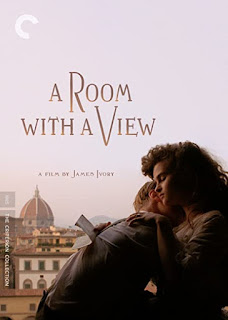 Recently watched the 4k Blu Ray of Jaws. A beautiful transfer. I have seen this movie many times over the years but it still looks like it could have been filmed yesterday not over 40 years ago. \
Also recently rewatched Chinatown. One of my top ten favorite films. Hasn't dated at all.
Chinatown would probably not get made today. At least not as a major release from a big studio. It would either be a independent film or a HBO movie.
I agree with you that few directors can get funding for expensive films that are not part of a franchise like James Bond or a comic book adaption. Unless you are Tarantino or Paul Thomas Anderson. It took years for Martin Scorsese to get funding for The Irishman.

Funny. We watched CONDOR a couple of years ago (after I read James Grady's collection of Condor short stories), and other than the basic premise, I hadn't remembered the details. I do remember Day Lewis in A ROOM WITH A VIEW. At the time, I read most of Forster's books, including HOWARDS END and A PASSAGE TO INDIA. We started watching the mini-series version of HOWARDS END, but I greatly prefer the Emma Thompson version and we quit after one episode.

Recent rewatches? Well, we did watch THE BIG CHILL last night, and what struck me was that it was almost THIRTY-SEVEN years ago! No wonder Glenn Close and everyone else (especially Tom Berenger) looked so much younger. Yes, it is slick and superficial, but look at the cast. Close was nominated for an Oscar, but the star for me (in a very understated performance) was Kevin Kline.

We watched 1776 as usual on July 4, and as usual enjoyed it (even though I know how much was changed from reality). I can never see anyone but William Daniels as John Adams. Also watched (and enjoyed more than I expected to) THE MUSIC MAN. We always watch TWO FOR THE ROAD on New Year's Eve, but we stuck in another watch halfway through the year. I never, ever get tired of it.

Like Steve, I enjoyed rewatching CHINATOWN. And, like the Meyersons, Diane and I both love THE BIG CHILL. I have the soundtrack from THE BIG CHILL around here somewhere. Now I want to find it and listen to it.

And I think of Paul Giamatti as Adams after the HBO series.
I tried to watch that version of Howard's End unsuccessfully too. I watch Jaws every summer although I guess it's responsible for the transition to summer blockbusters more than any movie. Still not it's fault. I will now have to watch The Big Chill tonight. After that film, Kline seemed to do comedies where he is more uneven for me.

I've also seen JAWS and CHINATOWN recently and found them to be as good as ever. For some reason I'd forgotten how great Richard Dreyfuss was in JAWS, even though I'm a big fan. Hadn't thought of THE BIG CHILL in ages, but just looked and found it on SHO On Demand. Currently I'm in the early stages of a Kubrick binge. In the last month I've seen PATHS OF GLORY, perhaps the greatest antiwar film, and LOLITA, a rare Kubrick misfire, but well worth watching. Last night I recorded SPARTACUS, which I haven't seen since its original release.

I guess I am in a Daniel Day Lewis binge because I am watching MY BEAUTIFUL LAUNDRETTE tonight, which I have never seen.

Patti- He has rarely made a bad movie (Stars and Bars maybe). Been thinking about rewatching There Will Be Blood or Last of the Mohicans.

We saw MY BEAUTIFUL LAUNDRETTE in 1985 as part of a double feature set in Thatcher's England (with LETTER TO BREZHNEV).

Yes, Steve, he has to have one of the most solid list. Good choices, good luck or he makes any movie look good.

We definitely preferred LAUNDRETTE to the other. I haven't seen it since, but it was good. Day-Lewis had quite the different look in that. And compared with how he looked in A ROOM WITH A VIEW, you would never guess it was the same person.

That is why he is so brilliant.

MY BEAUTIFUL LAUNDRETTE struck me as good rather than great when I saw on a PBS station some thirty-odd years ago, and a recent rewatch put it in the same class...I certainly remembered the protagonist's cousin flashing him most clearly of all the imagery in the film, which was one of the first portraits of contemporary UK subcontinental culture I saw in film...one of the first UK Channel 4 films to get much clearance here, in their early more adventurous years (and before PBS was terrified by FCC fines).

Like CONDOR, though the degree to which Faye Dunaway's character falls for her bullying captor struck me as problematic at best...a bi more Assumed To Be Likely than even the hints of her masochism would make completely believable to me. Still, vastly better than such other attempts at paranoid espionage films such as THE PARALLAX VIEW. Just not up to THE IPCRESS FILE nor THE SPY WHO CAME IN FROM THE COLD...or THE CONSTANT GARDNER, though close. The first time I saw it was only a few years ago. It's currently on cable, or was.

THE CANDIDATE, among Redford films, remains brilliant. Have been enjoying a rewatch of ST. ELSEWHERE (post-season 1), with William Daniels in his Other best role. George Grizzard wasn't too bad in THE ADAMS CHRONICLES, as I recall.

Yes, Grizzard (who we met once - he lived in my aunt's building on First Avenue in Manhattan) was good as Adams. Giamatti is good too, but not a favorite in this role.

Have not watched THE CANDIDATE in years. Maybe a Redford fest next. Looks like I will be in lockdown for six months at least. No, I did not especially like Giamatti as Adams although i am not fond of Adams either.

I remember watching A Room With a View. I thought it was very well done. And although I admit I've never seen Three Days of the Condor, I've wanted to - thanks for the reminder.

I really liked A ROOM WITH A VIEW a lot, and bought the VHS tape, which is worthless as I don't have a player for it. Beautiful film. merchant & Ivory really did an excellent job on it and their other films.