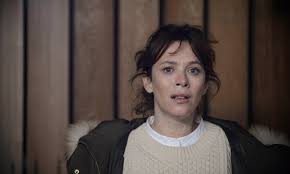 We have been watching MARCELLA on Netflix (from ITV in the UK) and find it difficult to follow at times. There are so many characters and so many plot threads. And they introduce an idea about Marcella's sanity and five episodes in they really haven't followed up on it . We don't know what incident got her into trouble. (Unless I dozed off).
When her husband paid people to beat him up so he would feel something, I almost bailed and I still might. No one in the series acts the way you'd expect them to act. Would a student writing a thesis continue to spend time alone with a man who has murdered several people?Would the cops allow Marcella to investigate a case involving her husband's firm? Or any case for that matter. And her kids, banished to prep school, seem to hate her but we never learn why. Why is everyone so suspicious of her? It's like there was a first series we missed.
If I didn't know it was going to be wrapped up in one episode, I would never have stuck it out.
I much prefer the single thread narrative in shows this complex.
What are you watching?

I haven't watched Marcella yet, Patti. But I know what you mean about following a single thread. I prefer that, too.

Haven't watched it either, and may not. The reviews were not very good and yours doesn't change that.

We're watching: The Night Of. The Last Ship. Major Crimes. The Night Shift.

On Netflix (some are shows we missed before we had it): Occupied. Bloodline. Longmire. Orange is the New Black. Jack Taylor. Hinterland. Crossing Lines. Happy Valley.

Jackie watches a few more things I don't, including Murder in the First and Feed the Beast and American Gothic.

I've been watching those Inspector Morse "Endeavour" episodes on Masterpiece Mystery--mostly because I'm usually getting reading for bed about then and I out the tv on in the bedroom while brushing my teeth, etc. They're set in the 1960s and feature Morse when he was just a rookie copper. I tuned in last night and instead of Morse, it was his successor, Inspector Lewis (back to Oxford in contemporary times). I started watching and got pulled into the story. A good little mystery.

And since I tend to drift off to sleep with the tv on (especially when my husband is out of town as he has been for the past few Sundays), I tend to wake up on "The Tunnel" is on. I can just about piece together what's been happening so I've been watching, but I don't like the "magical Aspie" character as my daughter--who has Aspergers--refers to shows that want to turn a firm of autism into some superhuman perceptive power.

I'm tempted to watch MR. ROBOT. I have access to the First Season ON DEMAND and the Second Season just started. The reviews have been very positive. Meanwhile, Diane and I must be the only people in the U.S. watching BRAIN DEAD, the series from the people behind THE GOOD WIFE. If you like alien bugs taking over people (think THE BODY SNATCHERS) this political series is for you.

I think MR. ROBOT is worth watching but it's another show that makes me paranoid about corporate American so I bailed after two eps. Several people have told us BRAIN DEAD is very amusing.
Deb-I got so mad at the first Endeavor where they stole THE GREAT GATSBY, I gave up. Maybe the next three were better. There is a drama on autism on SUNDANCE right now, which looked to be good.
Best season in a while on ORANGE. Horribly realistic. Also THE NIGHT OF seems great if also disheartening. But the characters are complex and so well done. Happy Valley is great. Could not understand a word said in Hinterlands. Need to go back and use subtitles.

Even Jackie quit BRAINDEAD after two episodes, and she watches - well, I won't quite say anything, but she does watch ZOO. Patti, I thought it was weak.

We didn't like the first series of ENDEAVOUR and quit watching after 2-3 episodes. Give me the real Morse and Lewis any day.

Patti, After the first episode Jackie insisted we use subtitles for HAPPY VALLEY too! But we don't use them for HINTERLAND. Quite a change from a priest on GRANTCHESTER to the murderer on HAPPY VALLEY, wasn't it?

Jackie wants me to forcefully recommend OCCUPIED as being incredibly topical. I believe Jo Nesbo wrote the original story.

Where is it? (Occupied) Never mind I will google it.
An amazing actor although I have not watched GRANTCHESTER. I took the NYT's initial review too seriously and now I will have to watch it on netflix, I guess. Yes, I rewatch the Morse's every so often. Love them.

Occupied is on Netflix. It's set in Norway as there is a crisis over oil. Then the Russians...well, try it. It's mostly in Norwegian with subtitles, but when the Norwegians and Russians converse, they both speak English.

I'm not much of a binge watcher--two episodes of anything in one day is generally my limit. But I blew through all 8 episodes of the Netflix series "Stranger Things" in two days. If you loved 80s era Spielberg and Stephen King this is an absolute must. Also, HBO's "The Night Of" is looking very good after the first two episodes.

Guess I'm the lowbrow of the bunch. I was hooked on the reboot of the 70s game shows on ABC Sunday night. Mostly it was "100,000 Pyramid" that I enjoyed. A game show that required intelligence and wit for a change, it restored my faith in an America of people who are both literate and knowledgeable. Something you have no clue with those games shows that were all about guessing and luck. "Match Game" was always inane -- like a bunch of teenagers tittering over bad sexual innuendoes and bathroom humor. They've recaptured the puerile sex joking of course. It sort of nauseates me and fascinates all at once. Alec Baldwin doesn't even attempt to mask how much he hates hosting the show, making fun of the concept, the writing, and sometimes the contestants. He also throws the F word around with glee and they have to bleep him because it's network TV. A laugh riot. Sometimes it can be genuinely funny. You find out who can be authentic without resorting to Hollywood fakery on these types of game shows.

To make up for all that wallowing in garbage TV I watch "Endeavor" and "Inspector Lewis" online. I liked the bizarre stories in the Endeavor series. Many people complained about them being "rubbish" and over the top, especially the one about the tiger. But that's exactly why this season's shows appealed to me.

Not watching anything at the moment.

Not a lowbrow at all. You are a scholar examining the past through game shows!

Been watching the Tour de France, but it comes on at 4:30 am here on the west coast, so it's hard for me to get up for the beginning. I'll skip the conventions. As for the other summer series to which you refer, nope.

I got hooked on PREACHER. Kitty hates it. **sigh**

We tried Preacher. First one wasn't bad but Jackie hated it.

We're watching 12 Monkeys, which grew on me with Emily Hampshire's sly humor as Jennifer this season. They keep giving her little bits like the opening of GROUNDHOG DAY in the episode where they keep "dying" and coming back to the same opening.

I like PREACHER. Phil hates it. At least off and on hates it. If a story has the look of a LOST, where it doesn't seem like it's plotted well through the end, he doesn't like it.

I suppose in a few weeks we'll all be watching the Olympics. Yes?

Well, some of it.