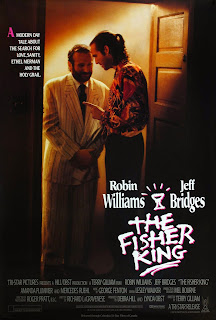 Terry Gilliam directed this in 1991 and I liked it a lot at the time. Jeff Bridges plays a radio DJ (shock jock) who rants against hippies on air and a madman goes on a rampage and kills some people. (sound familiar). This pretty much destroys his career. Later he meets Robin Williams, who has gone off the rails after the death of his wife, and has delusions which the film is adept at showing. The two become friends and help each other escape their paranoia.There is considerable romantic interest too as both men find love  I haven't seen this one since its release and wonder if it would hold up now. The initial premise would be very disturbing.
Posted by pattinase (abbott) at 5:00 AM

I too have not seen the movie since it was released, but I think the biggest shock in retrospect would be that a Shock Jock would (a) lose his job for inciting violence and/or (b) feel any shame or regret about causing said violence, up to and including death. So much has gone downhill since 1991.

P.S. Am I going to your spam folder again? The comment I posted this morning about Megan's book disappeared.

Jackie loved this one. Her favorite scene was the waltz in Grand Central. Every time we walk through it she mentions that scene. I was thrilled Mercedes Ruehl won Best Supporting Actress at the Oscars. She was also great a couple of years earlier in MARRIED TO THE MOB.

I have always found Amanda Plummer difficult to take, however. She's the kind of "quirky" actress I don't like, like Carol Kane.

This will never be a forgotten movie in my book. Profoundly affected by this. One of my all time favorites. Doesn't Michael Jeter do that extremely weird singing telegram delivery to Amanda Plummer in this movie? I can hear him screeching "I had a dream! A dream for guess who, Lydia?" right now. Such a brilliant mix of absurd humor and deeply moving drama. For me a *very* personal movie.

I think this was the golden period for both William and Bridges. Bridges made FABULOUS BAKER BOYS just before this followed by AMERICAN HEART, FEARLESS and Williams had DEAD POETS SOCIETY and GOOD MORNING VIET NAM behind him while AWAKENINGS and ALADDIN were about to come. Two of my favorite actors. Back in the late 80s and all through the 90s I went to see *everything* that Jeff Bridges was in -- no matter what the critics said.

I saw it and remember liking it but it sure wouldn't hurt to see it again.

It holds up fairly well. Jeff Bridges has always been one of my favorite actors. Robin Williams can sometimes be hard to take.

I never see it on TCM. Maybe they don't own the rights. Would like to see it again. Bridges always good; Williams sometimes. Jeter was amazing. He died too young. Remember him from EVENING SHADe.

This was a great film, one of my favorites. So wonderful. My favorite bit is (spoiler alert!) you think Robin Williams is the fool who'll save Robin Williams' king, but it's really the other way around.

Crap, I meant Robin Williams is the fool who'll save Jeff Bridges' king. But opposite.