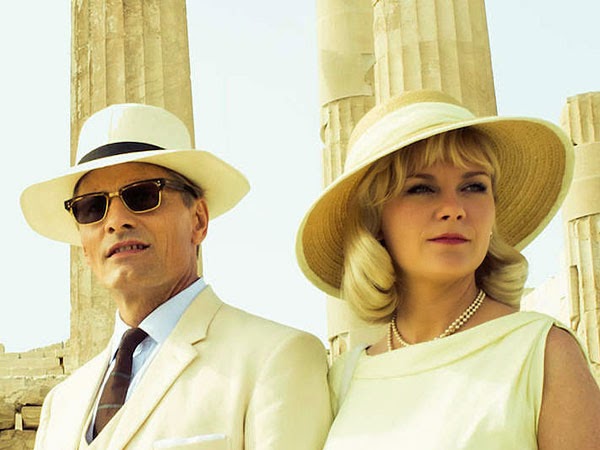 This was one of those times when I really wished I had read the book first. I liked many things about the movie, especially the look of it, the setting (Greek) directorial decisions, and the chemistry of the two male leads. But for me it also needed chemistry between the female and both male leads. And, as so often is the case, Kristen Dunst was unable to convince me that she felt particularly passionate about either man, especially the one she should for plot purposes.

I find her a curiously cold actress. Not untalented but only effective in certain parts--much like Grace Kelly. I certainly recommend seeing this movie because of its richness in suspense, the look of it, the story. You will forget, at times, it wasn't filmed in 1962 when it is set. The music could come from any movie made during that period. There are times you would swear Alfred Hitchcock must have directed it. As always I was impressed with Oscar Issac and Viggo Mortensen. But on the whole, a disappointment as she doesn't provide the motivation necessary.

What movie didn't work for you due to a lack of chemistry. Does that ever happen in a book? Does an author ever fail to inject enough romantic sizzle into his/her characters?
Posted by pattinase (abbott) at 6:56 AM

I have read TWO FACES OF JANUARY and look forward to seeing the movie (now warned by your fine review). I'm with you on Durst. But Patricia Highsmith is a chilly writer. You're not going to find much warmth in her novels.

I admit I'm new both to the book and the film. I do think, though, that that chemistry is really important. And lack of it can make a story fall completely flat.

Can't think of anything off the top of my head (OK, how about OUT OF AFRICA?) but lack of chemistry has killed more Hollywood romances dead than bac acting or directing, it seems to me. I don't dislike Dunst the way I dislike Juliette Lewis (every time I see her "stern" face on the SECRETS AND LIES promos I'm glad once again I didn't watch it) but I do know what you mean.

Yes, if Streep lacks something as an actress it's chemistry with her male leads and Redford shares that problem. When chemistry is essential to give motivation, it really can hurt. I think Dunst had more chemistry with Spiderman.

Don't think I'd even heard of this one.

I haven't seen the film but I was floored by the moral ambiguity in the book.

Highsmith is a tough bird.

Juliette Lewis is a Scientologist, so you know how likely it is that I'll watch anything she's in.

I disagree with you about Dunst in this movie. She was directed to be that way. I think Colette was just a much a user as Chester and Rydal were. Dunst didn't need to be convincing about her desire for either man. I don't think it's genuine in either case. When she needed to protect her comfortable life with Chester she turned on the charm, when she tired of him she turned to Rydal whose enthusiasm for life was greater than her fretful husband's, finally when she feared Chester and saw him leading them into destruction and ruin she lost control of her carefully constructed veneer and fell apart. I'm planning on reading the book next month, but I don't expect much of Colette to be fleshed out. Highsmith was notoriously cheap when it came to her female characters.

Anyway, she's barely in the movie and the focus is really on the two men. There was one patch where I felt the movie slowed down a bit and notably it was the scenes between Isaac and Dunst, but I was wiling to overlook it. I think it's well worth a look. Besides top notch acting form the men it's very well constructed for a suspense movie. One of the better ones I've seen in several years.