My Life at the Theater: The Price 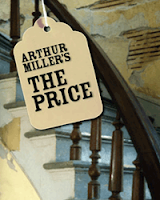 THE PRICE debuted on Broadway in 1968 and played for more than a year. It has twice been revived on Broadway. I saw it at the Jewish Ensemble Theater in West Bloomfield Hills, MI in 1993. I always get a lot out of Miller's plays and have seen a lot of them.

This one concerns two brothers and a sister, squabbling after their father's death about a piece of furniture and the quality of their lives. Most of Miller's plays concern fathers and sons. Or at least family relations. I guess most plays in general do.
Posted by pattinase (abbott) at 3:44 PM

I remember seeing the TV adaptation from 1971 with George C. Scott, Colleen Dewhurst (then in her second go-round as Mrs. Scott) and Barry Sullivan.

Haven't seen this but it would be interesting to compare with August Wilson's Piano Lesson, which I did see recently and also involves squabbling and family drama. Sounds good.

Love PIANO LESSONS and THE FENCE. He was maybe the best black playright IMHO.

Patti - I've always liked Arthur Miller's stuff, though not seen this one. I liked the way he wrote about real people.

Another one I should watch.