How I Came to Write This Book: Helen FitzGerald 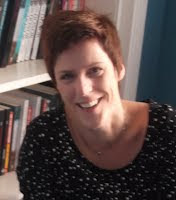 Born in Melbourne, Australia, and one of thirteen children, Helen FitzGerald moved to Glasgow in 1991. She was a criminal justice social worker in Glasgow’s notorious Barlinnie Prison before becoming a full-time writer.

Her adult thrillers include Dead Lovely, My Last Confession, Bloody Women, The Donor and The Devil’s Staircase, which is currently being made into a feature film. Her books have been translated into numerous languages.

Her first YA, Amelia O’Donohue is SO not a Virgin, was published in 2010. Her novella, The Duplicate, is out with Snubnose Press in April 2012. Her YA thriller, Deviant, is to be published in 2013 by Sohoteen. She is currently writing her new novel, Cry, for Faber and Faber, out 2013.

How I Came to Write THE DUPLICATE

For the first month of Form One, I was terrified.

A month after that, a teensy bit intrigued.

A month after that, really quite desperate.

All my mates had counted bricks. Apparently it didn’t hurt at all. So I was thrilled when my best friend gave me a note from her boyfriend’s best friend which read: “Wanna count bricks after school Friday?”

I said All right.

Turns out the boy, Mick*, was quite a gentleman and kept his fingers to himself. I stood with my back to the wall, he put his hands on the brick wall, and kissed me. It was an open-mouthed no-tongue kiss that made me panic. My pals had told me they were all going full tongue. But this hot cavern didn’t appear to have a tongue in it. I gold-fished for a while before heading in to find it.

That weekend, I couldn’t sleep for love of Mick. We would probably get married one day.

When I got to school on Monday, my best friend gave me a note from her boyfriend’s best friend which read: “You’re dropped.”

Does this have anything to do with The Duplicate?

Except that Barbara’s need to fit in is so overpowering that she completely surrenders herself to her first love.

And as with me, it doesn’t end well.

*John’s name has been changed to Mick for legal reasons.

Hahahaha! Poor John -- er, Mick. He doesn't know how he lost out. Sounds like fun.

Thanks so much for the inside view.