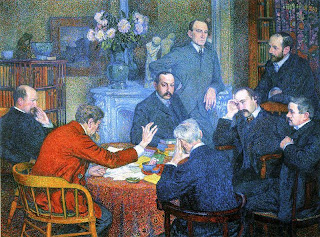 Brian Solomon is a an editor by day and prolific blogger by night. In between, he somehow manages to be a husband and father, and maintain an idyllic home in suburban Connecticut. He is the author of Standard of the Day, a blog/labor of love in which he spotlights different selections from the Great American Songbook. He is particularly fond of the work of Cole Porter and Johnny Mercer.


The Case of the Yellow Mask
By Robert J. Hogan

This was the third of only seven novels published in the pulp series The Mysterious Wu Fang during late 1935 and early 1936. As with all the old-school pulps of the 1920s-1950s, it was released on newsstand in a paperback format slightly larger than the mass market paperbacks of today, yet smaller than a magazine; and printed on cheap, newspaper stock.

The series is also notable for being one of the only ones to ever star a villain, and not a hero like The Shadow or Doc Savage. And although a blatant knock-off of Sax Rohmer's Fu Manchu character, Wu Fang is nevertheless imbued with a tantalizing readability thanks to the snappy, action-packed prose style of Robert J. Hogan, best known for his war series G-8 and His Battle Aces.

The Case of the Yellow Mask tells the story of Wu Fang's sinister plot to acquire a mask that will give him the ability to control men's minds. Only three men, Jerry Hazard, Val Kildare and young Cappy have what it takes to stand in his way and foil his dastardly plot. Along the way, they travel halfway around the world, leaving a trail of dead bodies and near-death experiences in their wake. The cover is rendered by Fu Manchu artist John Richard Flanagan, and epitomizes the coded sexuality so often present in the pulps as well (it also prefigures a scene in that ultimate cinematic pulp tribute, Indiana Jones and the Temple of Doom.)

I first came across The Case of the Yellow Mask in reprinted form as part of Adventure House's High Adventure series, and was immediately cast under the spell of the pulps. I became so fascinated by the Mysterious Wu Fang, in fact, that I even ventured to New York's Chinatown, just to check out the address described in the book as being the crime lord's secret headquarters. (Although the building did look remarkably as described, it was by this point a Chinese fast food restaurant...)

The Case of the Yellow Mask is pure lowbrow fun in the grand pulp fiction tradition, filled with lurid descriptions of politically incorrect henchmen, heavy handed action sequences, lightning fast dialog and a never-ending supply of thrills and adrenaline. Hogan himself was reportedly less than proud of his work on Wu Fang, but I, for one, found it impossible to put down. Not only that, but it sparked a lifelong love affair with pulp novels that continues to this day.

by Richard Stark (Donald E Westlake)
(Yes, the cover really does cut off the publisher’s name at the bottom)


"We live and learn." That's what Parker says to an adversary immediately before shooting him point blank in the eye.They don't come much tougher than Parker, and he's his usual hardass self in the muscular 1998 novel, Backflash, by Richard Stark.

After walking away from a heist with $140,000, he plans to take it easy for awhile, laying up with Claire, his longtime lover, in someone else's summer cottage amid the woods of upstate New York. But of course, he can't stay out of action for long, or there would be no series.

He's approached by Hilliard Cathman, former state government employee turned consultant, to do a job. It seems a new gambling boat will soon be unveiled, slated to cruise along the Hudson River. Cathman has the blueprints of the boat, as well as security details, schedules, locations of the safes, and all the things a man would need to hijack a cash-bloated gambling ship. The only thing missing is the team to do it.

Problem is, Parker isn’t sure he wants to take this job. It seems the only way to rob the ship is to do so while it’s cruising. That means getting back to shore with the money, and that means too much exposure in the middle of the river. He’s also suspicious of Cathman himself. Why would this guy, an obscure lifelong bureaucrat, suddenly want to organize a major armed robbery?

Of course, Parker eventually agrees to the job, but not before he figures out an extremely devious solution to the money/exposure problem. He rounds up his usual assortment of criminal types and they set about plotting the robbery in a very matter-of-fact, professional manner. But he’s still plenty uneasy about Cathman. Stark’s pacing in these Parker novels is always letter perfect, with the plot only slowing down long enough for the character to catch his breath or to contemplate his next move. These moments are usually tinged with suspense, as in a tense scene on the ship immediately before the robbery.

The entire novel takes place in Albany and other smaller towns along the Hudson, and Stark gives the reader an excellent sense of place. Although these locales aren’t that far away from New York City, they still feel like the middle of nowhere, which is exactly how Parker wants it. Less of a problem with witnesses that way.

Backflash is an excellent entry in the long-running Parker series. Beneath all the planning and execution of the heist, there’sa convincing unapologetic defense of the code of criminal justice as meted out by criminals.

Ed Gorman is the author of Ticket to Ride, Ghost Town and numerous fine books of fiction. You can find him here. 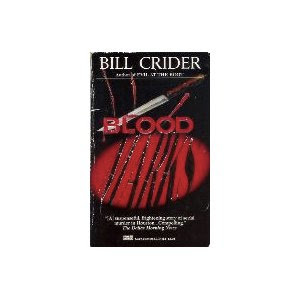 Tiresome as the sub-genre can be (though there are always good ones; the John Lutz books for Kensington are particularly notable) one of my favorites was first published in 1991.

Nine women are savagely murdered. They don't seem to have anything in common. Police psychologist Dan Romain teams up with a investigator named Howland to find the connection that will lead them to the killer.

Crider alternates chapters between the killer, the investigators and Casey Bruckner, a newly divorced mother who's moved to Houston seeking a teaching job. They live in an apartment complex that allows Crider to demonstrate his skills with creating people. If you've ever lived in one of these complexes you know the neurotic responses people have to being stacked on top of each other, especially people with dissimilar interests, tastes and values. One of whom just might be the killer. The ying and yang of sitting around the apartment swimming pool allows Crider to shine.

The police procedural aspects of the novel are believable throughout. No Zounds! discoveries. No faux tough guy talk. And a close examination of a type of killing that is almost too violent to contemplate for very long.

Bill Crider has had a long and successful career working primarily in mysteries but also excelling in horror and westerns. This is Crider at the very top of his form and making the serial killer form all his own. It's a book you'll remember for a long, long time.

For those who (rightly) associate Bill Crider with the more mild-mannered Sheriff Rhodes series it's good to be reminded of his darker side. (You might also want to look for his 'Jack MacLane' books.)

As always, thanks for these terrific Forgotten Friday books. Love 'em!!

Enjoy your break away from things. Man, the Friday's creep up on me so fast.

Wow, some fun reads here -- and I just LOVE the cover for the Westlake one! (yes, my mind is stuck on covers at present).

I'd like to take a room in my house and have wall-to-wall covers. (I do frame my daughter's.)
They creep up on me even faster, Charles.

Ah, an American in Paris. Shades of Gershwin. Enjoy!

Thanks for the opportunity to contribute!

Love these articles - can I take part next week?

I'll tell George you'll be posting one as I will be away until June. Thanks!

Brian-Hope you do another one soon. I'll be looking in on your fabulous blog.