FLY AWAY WITH ME 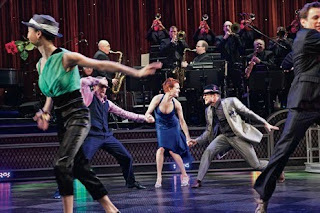 It's been interesting reading the reviews and discussions going on about Twyla Tharp's new show FLY AWAY WITH ME (and it is a show rather than a performance) on Broadway.

We saw this production when we were in New York last month. I was disappointed. I expected to see a modern dance performance and what I got was a Broadway show--but one with only the dance numbers-- no plot and using mostly taped music. The worst of both worlds in some ways. It was a series of pas de deux with none of the exciting moves you usually see in modern dance. Using just two dancers in almost every scene was dull. Modern dance is exciting because of its athleticism. There was little of that here. Nobody was doing anything the typical Broadway dancer didn't do.

But it was fun reading the contrasting reviews. Today another article in the NYT spoke of the discomfort felt when everyone was enjoying a production or movie you did not. This was how I felt watching FLY WITH ME--like I was missing something.

It's hard to remember experiences such as this, but

What's the best thing you ever saw live on stage-be it a concert, play or dance?
Posted by pattinase (abbott) at 12:00 PM

My most memorable concert was my first concert: Bob Dylan & The Band in 1965. Loved Colm Wilkinson in THE PHANTOM OF THE OPERA and LES MISERABLES (both in Toronto).

Is Colm Wilkinson a Canadian actor? Hard for me to top Philip Seymour Hoffman and John C. Riley in TRUE WEST.

My mom took me to see this famous Dutch comedienne Brigitte Kaandorp. She did a brilliant job balancing comedy with some more moving songs she wrote.

Standup comedy is still my favorite to see live.

I agree with George on Colm Wilkinson (who is Irish, not Canadian, Patti) being great - we saw him in Les Miz twice (in London).

I've always said the most memorable performance I've seen on stage was Cliff Gorman as Lenny Bruce in LENNY. Of course, when Bob Fosse made the movie he gave the role to the much bigger name, Dustin Hoffman, who was OK but did not hold a candle to Gorman.

Fosse tried to make it up to Gorman by having him play a similar character in ALL THAT JAZZ, by the way.

Two memorable concerts were most notable for the emotions involved: Jimmy Buffett's Benefit concert for the Victims of 9/11 on November 16, 2001 at Madison Square Garden (the first time we went into the city after that day), and (also at MSG) the amazing Katrina Benefit "From The Big Apple to The Big Easy" on September 20, 2005 (3 weeks after Katrina), with Jimmy Buffett, Simon & Garfunkel, The Neville Brothers, Irma Thomas, John Fogerty, Bette Midler, Allen Toussaint, Clarence (Frogman) Henry, Buckwheat Zydeco, Lenny Kravitz & Cyndi Lauper.

The 1975 Bicentennial concert in Concord, Massachusetts. It was a drizzly night and I had to climb up five sets of staging to where Pete Seeger was performing. At the same time, my wife found shelter in a tent where Phil Ochs was holding court; she was the only non-stoned person in the tent but we have a photograph where she looked stoned and everyone else looked straight.

As far as theater goes, we were house managers at the Merrimack Reperatory Theater in Lowell, MA, when Wright and Forrest's The Anastasia Game had a three-week preview. Starring Judy Kaye, Len Cariou, and Steve Barton, the music was based on the works of Rachmaninoff. A great experience. Unfortunately, Wright and Forrest were also previewing Grand Hotel at the same time, twenty-five miles away in Boston. Grand Hotel had stronger legs and went on to Broadway and the Tonys; The Anastasia Game (reworked and retitled) died on the vine after sixteen performances on Broadway.

Springsteen's last concert on the "Born in the USA" tour--at the L.A. Colliseum in October of 1985. For some reason it had been postponed from an earlier date, so--although it hadn't originally been scheduled as such--it ended up being the last show of the tour. My birthday was just a few days before (I won't give my age away--but I was still in my 20s at the time), and the concert was a belated birthday gift. The Boss was absolutely at his peak--and he sang my all-time fave, "Prove It All Night," which he apparently had not done during many of his other shows. Fabulous stuff!

Musically, so many...The 2001 International Association of Jazz Educators (IAJE...RIP) convention was as much a love fest as any fannish con, with sudden concerts in the hallways as well as up on stages and in conference rooms. I met Max Roach, Joe Morello and members of Mingus Dynasty, among many others, at that occasion. The musical parts of the First Thelonious Monk Memorial Concert, when Debbie Allen wasn't hammishly over-enunciating "jazz" in her effusive (and Looong) opening speech, but when David Amram and Dizzy Gillespie, Urzala Dudziak, Gerry Mulligan, the Marsalis Brothers' bands (particularly Branford's) and others were singing and playing...some, at least, of the DC Free Jazz Festivals...the Mostly Bluegrass Festival at Wolf Trap...the Gay Rights Positive Force DC multiband Concert my ex Donna was primary instigator of (I worked the door on that occasion)...the Modern Jazz Quartet and the Kronos Quartet at Wolf Trap...a performance by Jawbox at a church basement show, in their original three-person lineup, which was simply transcendent.

Urszala Dudziak, that is. Did a solo vocal performance with herself and a voice playback recorder, which the DAR crowd couldn't wrap their heads around. And they, unlike myself and my companions, ignored her (!) at the reception afterward, though the other musicians eventually sought her out. (Her US debut?)

Concert: either The Moody Blues or a concert when Chicago when that group was just starting out (same concert: Procal Harum and Love. Also, maybe, my first concert, when I was a junior in high school, when I saw Dick Dale and the Deltones along with the Surfaris and The Impacts. Surf music!

Play: probably a presentation of Tom Stoppard's "Jumpers" sometime in the early 1980's.

A tough one, but I'm going to vote for THE COMPLETE WORKS OF WILLIAM SHAKESPEARE (ABRIDGED) at the Piccadilly Theatre in London. Laughed my ass off. (It grew back, though.)

Oh yeah, I forgot one: Diana Rigg, naked, on stage in ABELARD AND HELOISE in the 1970's.

That was memorable, John Simon's famous critique to the contrary.

A couple more concerts: Roy Orbison at Pier 84 the summer before he died, sounding amazing; and Rodney Dangerfield at Radio City Music Hall.

I saw Dylan a the Fox in the eighties but it was disappointing.
Diana Rigg naked. That must have been a treat.
I have seen surprisingly few musical concerts when I think back. But over a hundred plays. I guess it will always be words over music.

The Who in San Francisco in 1973. For theatre (note snooty spelling) I'd say Forty Carats at the Bremerton Community Theater, but only because I was in it. Next would be Jersey Boys.

When I was in high school in the 1960s, I went to several Shakespeare plays at Straford, CT.

I saw Pearl Bailey on Broadway in 1971 in Hello Dolly! I saw Nureyev and Fontaine perform Swan Lake (also in the 70s).

Corning (NY) used to have a great summer theater. Most of the time they showed musicals, which I don't particularly like. But one time they did Other People's Money and incorporated local info in the script. That was fabulous! (The movie, with Danny Devito, was a huge disappointment.)
...

My husband did that, too. My school never took us anywhere outside of Philly. I think seeing live theater as a student is so important.