Actors Who Have Gotten Better Over Time 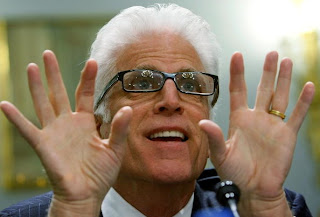 Ed Gorman is going to disagree with this but I am going to say that I think Ted Danson has become a better actor in his later years.

Ted Danson, so fabulous on the first two years of "Damages" now makes the show "Bored to Death" (HBO) zing for me. Maybe Sam Malone on "Cheers" was a limiting role, but he never knocked me out in it. Sam was too one-dimensional to be very interesting.

Or maybe Danson is best in a supporting role. But beginning with "Curb Your Enthusiasm," he has become the kind of performer I can't take my eyes off--(IMHO).

Who's improved over the years for you? Who didn't you appreciate until you saw them in a role with some teeth?
Posted by pattinase (abbott) at 9:00 AM

Well, as you might've gathered in the discussion on NewImprovedGorman, I tend to agree about Danson's abilities, except that I think he's fine as a lead as well (as in the rather bland BECKER, and better in the better HELP ME HELP YOU); he wasn't bad, seeing him again the other day, in an earlyish role in BODY HEAT.

Among the Improving, certainly Jessica Lange is an obvious example, and Tony Curtis comes to mind as someone who picked up some schooling as he went along (not that he's consistently employed it).

I'm going to say Jon Voight. Couldn't stand him young, but he's grown into an interesting heavy. On the other hand, I used to like Chevy Chase. Now? Quick, pass me that remote!

All great examples. Sometimes it's the role that eventually finds them.

Morgan Freeman, though perhaps he's been great all along.

Now he was someone I wasn't familiar with much before Driving Miss Daisy. I missed his earlier work too.

He's GREAT on Curb, but I wasn't thrilled with his same old shtick on Bored (but I am gonna give it a 2nd shot).

Also GREAT is the collection of short stories you recommended here ... American Salvage by Bonnie Jo Campbell. Really terrific. Thanks.

So glad you liked them. She's getting all sort of offers. Nothing like an NBA nomination to jumpstart things.

I'm sure I'll get disagreements with my choice as well. I never cared for John Travolta in his Saturday Night Fever days. He's grown into a very good heavy in recent years.

I do agree, Randy.

collin farrell. IN BRUGES redeemed him.

Morgan Freeman first came to national attention, iinm, on THE ELECTRIC COMPANY, as "Easy Reader" among other usually nameless characters. Pretty good then (I think only Rita Moreno had an established career nationally before signing on to that series, among the regular cast).

I think Johnny Depp is the most interesting actor performing today. Whatever movie he decides to be a part of, I want to see it. If you haven't seen Depp in THE NINTH GATE, you're missing something special.

Well, yes and no. Bill Cosby was on the series in it first season or so, and Joan Rivers, Mel Brooks, Gene Wilder and Zero Mostel were voice actors for a regular cartoon segment for several seasons. But aside from bit parts in movies, it's what IMDb lists as Freeman's launchpad, even though they seem to think he wasn't on the series till its last seasons (not the case).

Todd Mason said...
This comment has been removed by the author.
12:35 PM

OH, Colin Farrell for sure. I hated him in most parts before that one. But that one was terrific. Has Depp ever had a bad performance. My favorite is Who's Eating Gilbert Grape and that is definitely my favorite DiCaprio performance. TEC was a good show for slightly older kids. I wonder why they ditched it so early. Maybe when things like the Disney Channel and such came along

Well, Children's Television Workshop seemed willing to dump any of their series that weren't SESAME STREET...none of the others had big puppet/stuffed toy revenues, and certainly THE ELECTRIC COMPANY (recently revived on PBS) lasted longer than 3-2-1-CONTACT or THE METRIC SYSTEM.

21 JUMP STREET generally and the WONKA remake are among the bad Depp performances.

I cannot remember the actor's name--shame on me--but let me add another to the conversation: the actor portraying Lewis in the new TV mystery series (as a spin-off from the earlier Inspector Morse series) has matured into a superb actor. Yes, the protagonist role suits him better now, and he is no longer in the shadow of the dominant John Thaw (the actor who player Morse); all-in-all, though, his performances are superb. I hope you've had an opportunity to view the new series.

Todd, beat me to it. And I think he is amazing. He also used to play in a British series called PEAK PRACTICE, in which he was just as good as a doctor.

Tom Selleck. His role as Jesse Stone shows he was more then a face.

Selleck knows how to be still. To just let his eyes talk.

She did what she got asked to do probably. I doubt she ever had her choice of roles. Plus she had a relationship with Burt, right?

I agree about Danson. His performances on BTD and Damages have been amazing.

Judd Hirsch has been good, but he is awesome on NUMB3RS.