My Year Of Rewatching Movies 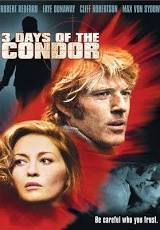 I am only rewatching movies I originally liked and it is unpredictable what I will think now. And I have to wonder if 2020 events is influencing my enjoyment.
1. Three Days of the Condor-just as good as ever. It doesn't feel dated at all even though the whole plot would go off the tracks if Redford was able to use a cellphone and a lot of other technology. You don't miss it and in fact, it keeps him isolated and thus it's scarier. Dunaway is adequate but not sensational. It is really Redford's movie.
2. After Hours. It sure seemed to take a long time to get going. The pacing was different then. Four kooky women was perhaps too many and they were all kooky in the same ways. But hey, that is the point of the movie. It was not as good as I remembered it, but it was fun (enough) once it got going.
3. Eternal Sunshine of the Spotless Mind-Boy, I guess this idea has been too much copied. Or Jim Carrey gets on my nerves more than he did fifteen years ago, or this is too full of gimcrackery segments. Didn't finish it. Central idea is interesting but the playout doesn't work for me. I may not be a Charlie Kauffman fan.
4  Age of Innocence-Better than it was thirty years ago. It was so good I sent away for the screenplay with commentary. Pristine, is a good word for it. The ending crushes.
5. Pygmalion I have seen My Fair Lady many times and I have seen stage versions of this movie, but I am not sure I ever saw this. It held up well considering its advanced age. Leslie Howard is a dead ringer for Phil's Uncle Tom. Wendy Hiller is amazing but not as much as she is in "I Know Where I Am Going."
6. The Commitments, The music is delightful but the story surrounding it is so hectic. A bit of a disappointment.
7. The Fisher King. I know I saw this but remembered very little of it. When I watch Robin Williams now I just think the tragedy is already in his eyes and he sure plays a tragic guy in this. This was neither better or worse than I remembered but made me want to watch Brazil. (Terry Gilliam)
8. Sunday Bloody Sunday. Maybe I never saw this before but I thought I did. Moody, sad, ahead of its time in its theme. Great acting. Anxious to see Glenda Jackson in her forthcoming movie Elizabeth is Missing.
What have you rewatched lately and did it hold up?
Posted by pattinase (abbott) at 9:34 AM

I've rewatched a lot of films in the last couple weeks.

1. All About My Mother and Women On the Verge of a Nervous Breakdown. Both Pedro Almodovar films. I enjoyed them but don't love them. I prefer his Talk To Me and Volver.
2. High and Low by Akira Kurosawa starring one of my favorite actors-Toshiro Mifune. Great film. Based on an 87th Precinct novel by Ed McBain.
3. Spartacus in a new 4k remastered disc. One of the best movies of it's kind.
4. Minority Report. Very good Spielberg film. Not great but very good.
5. Old Joy by Kelly Reichart. First time watching. Hated it. two hours following around to uninteresting slackers. Wanted to watch First Cow by her but had trouble streaming it so I watched this instead.
6. The Tenant by Roman Polanski. Interesting third film in Polanski's apartment trilogy after Repulsion and Rosemary's Baby. Not as good as those two.
7. The Virgin Spring and Shame. Both Ingmar Bergman films. Bleak but both masterpieces.

I agree with you on Three Days of the Condor. Redford was on a roll at that time of his career.

I like your list. I remember liking AFTER HOURS a lot when it first came out, but I'm not really surprised that it didn't hold up for you. I like Fiorentino in everything. Whatever happened to Rosanna Arquette?

THE COMMITMENTS is another I do want to re-watch. Jackie used to play the two CDs from the movie every day. We've seen the women from the film in other things - Maria Doyle Kennedy in ORPHAN BLACK, Angeline Ball in KEEPING FAITH (a show we didn't like nearly as much as the British critics did), Bronagh Gallagher in NEW TRICKS and RETURN TO MONTAUK.

Not a Charlie Kaufman fan - another I have always thought was very overrated by critics - and certainly not a Jim Carrey fan.

Haven't seen PYGMALION (or better, I KNOW WHERE I'M GOING, which I loved) in years. Ditto THE FISHER KING.

We have SPARTACUS ready to watch as soon as we have 3 1/2 hours free.

Captain Newman, MD. Wow. Havewn't though of that in years. Love RIO BRAV0. And of course, Two for the Road.
Lots of good ideas for me, Steve. I saw Old Joy at the movies and found it odd but not odd enough to be interesting.

CAPTAIN NEWMAN was on PBS here a couple of weeks ago. Terrific cast. Bobby Darin was nominated for Best Supporting Actor. Gregory Peck, Tony Curtis, Angie Dickinson, Eddie Albert, Robert Duvall (his second movie, after TO KILL A MOCKINGBIRD). I read the novel the movie was based on. According to Wikipedia, Leo Rosten based it on a real friend of his (who was later Marilyn Monroe's shrink, as well as Tony Curtis's!).

Hollywood shrinks must have had some stories to tell.
Jeff, you watched DARK. Did you have trouble keeping the characters straight. The plot is easier to follow than the characters across three or more time lines.

Love THE COMMITMENTS! Diane and I are watching A FISH CALLED WANDA this weekend for our FACEBOOK PORTAL session with Patrick and Katie.

Hope it holds up. Let me know.

Jeff--Rosanna Arquette is still very much with us...we correspond on Twitter a little. She's mostly doing indy films and some high-profile television, though her last recurring series role I'm aware of was on RAY DONOVAN several years back.

And there was a web series she starred in called SIDESWIPED recently, and she will be a recurring supporting character in RATCHED, the prequel-to-ONE FLEW OVER THE CUCKOO'S NEST series popping up somewhere soon, a Fox production.

I liked Pygmalion and I Know Where I Am Going, but Glen liked them even more. That is his type of movie. I remember liking the Commitments, but probably more for the music.

We recently rewatched Big Trouble in Little China with Kurt Russell. We had purchased a new BluRay edition. We watch it every now and then, but this edition had more extras which we haven't watched yet.

We saw BIG TROUBLE in Goderich, ON, CA. Only the Abbott family takes a two day vacation and has to see a movie.
I saw RATCHET advertised. Can't remember who played her.

Thanks, Todd. At one point she seemed to be everywhere, now not much. I always liked her.

Patti, my mother was the same way about seeing movies. I must admit that we've seen things over the years - AMERICAN GRAFFITI in Paris, LENNY in Munich, quite a few things in London. In fact, from our first visit there on our belated honeymoon, we saw movies along with theater. Jackie and a friend actually saw the classic (ha!) THE BETSY in Edinburgh.

I love that idea of rewatching films, Patti. We so often see things differently at different times in life...

Even in Krakow, we went to the movies twice and saw a Japanese movie, which had several sets of subtitles. There has never been a vacation when we didn't go to the movies. And in Paris, we went almost everyday while friends napped.
I love it, Margot, when I movie I dismissed at 25 has great meaning at 70.

Sarah Paulson will be Nurse R, Patti. As Mildred Perkins noted on Horror at Indiana U this morning, MP loves how Paulson is playing all thee villains when by her own admission on chat shows and other interviews she's personally a shrinking violet.

Making any effort to see THE BETSY under any conditions is the opposite of a vacation, though perhaps it is a vacancy. Kathleen Beller's cloying nude scene is mostly redeemed, particularly for the adolescent I was when seeing it on cable, by the fact that Ms. Beller is quite fetching nude, or at very least was. The film, very much including Laurence Olivier's probably intentional anti-performance, manages to be even worse than Harold Robbins's novel, which is really saying something. (It certainly held down at a what the hell re-viewing about ten years ago.)

THE EBONY TOWER was a better, nearly contemporaneous example of Olivier in the company of fetching nudes, in that case Toyah Wilcox and particularly Greta Scacchi.

In re: THE SONS OF KATIE ELDER...I'll say Elder, all right...she would've had to be having sons for nearly forty years or so...not that it wasn't possible...

Ah, yes...the Other trivial comment I meant to ad (roofers rushing to beat the weather--always a good thing--while I try to get some other bits of the house in order--if THE CHASE, which came up on Fb yesterday, didn't do enough with its powerhouse and soon to be expensive cast, THE BETSY utterly wasted its mostly talented and utterly star-studded cast...