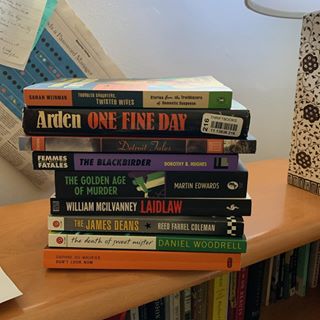 Judith at Reader in the Wilderness has started a new meme: Bookshelf Traveling For Insane Times. The idea is to look through a bookshelf or a bookcase or stacks of books and share some thoughts on the books. You can find more details here and here at Judith's blog.

DuMaurier-Don't Look Now and Selected. Another one from NYRB. Maybe I have them all! I read some of these stories including the title story and "The Birds." I should read more.

The Death of Sweet Mister, Daniel Woodrell. I have read most of his books but not this one. Not sure why. I think I had just read Winter's Bone and figured nothing could top that. He is a master and I wonder if there's another book in the pipeline.

The James Deans, Reed Farrel Coleman, My favorite book by Reed although I have not read the Jesse Stone books.

Laidlaw, William McIlvaney, A terrific book set in Glasgow. We have friends from Glasgow. I wonder if they've read it. I think McIlvaney is considered the father of Scottish noir.

The Golden Age of Murder, Martin Edwards, which I think I picked up at Boucheron as a gift bag book.  I've skimmed this, reading the writers that interest me.  It won lots of awards, I think.

Dorothy B, Hughes, The Blackbirder, Megan gave this to me but I haven't read it. I have only read In a Lonely Place by Hughes, which I think it one of the top five crime novels I have read.

Detroit Tales, Jim Ray Daniels, This is a very good collection of stories published at the depth of Detroit's depair although we might have a deeper one coming. Detroit went into the last recession ahead of the rest of the country. About 2001 or 2002 when this came out.

One Fine Day, Leon Arden, a friend kept telling me that he had a friend who published a book just like Groundhog Day. In fact, he had sent the studio a script for it. I don't know how much of that is true. There are similarities but it lacks the joyful nature of Groundhog Day. And no Bill Murray I didn't finish it, which was dumb because I went to some trouble to get it.

I wonder, looking at this, how often I actually read all of the stories in a collection. I am thinking, not too often.

Oh, I really liked Laidlaw, Patti. It's definitely best read when you're ready for noir, but it's an excellent story with good characters.

I've been assembling some P.G. Wodehouse books. They seem to be a perfect antidote to a pandemic.

Sadly I have never read one, George.

I like Laidlaw. I have a couple of his follow ups and some books by his son but have never gotten around to them yet.

Patti, let me know if you want some Wodehouse books. I have duplicates and would be happy to send you some.

Probably better to wait till the libraries reopen and try one there. Thanks, though. You are a sweetie.

I have the three books by McIlvany featuring Laidlaw but haven't read any of them yet. My husband had them and passed them on to me.
I have Twisted Daughter, Twisted Wives and have read a few of the stories.
I have only read The Davidian Report and Ride the Pink Horse by Hughes, and In a Lonely Place is the one I want to read next.