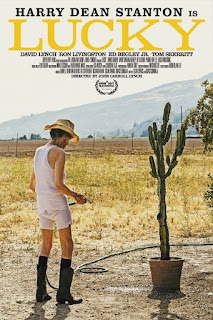 I have never been a huge Harry Dean Stanton fan although he has been used pretty effectively in his long career. I especially remember him from BIG LOVE where he played the evil polygamist in a cult of Mormonism. Also in the David Lynch movies. and in TWIN PEAKS

But LUCKY was a grace note to end a career on. At age 90+ it suddenly becomes clear to Lucky, an eccentric fellow living in the southwest, that he is going to die...eventually. Apparently other than a flash of the abyss at 12, he has given no thought to this before. LUCKY details his life before and after this insight. Wonderful to see James Darren, playing a bar buddy. Still handsome and still my teenage heartthrob. Lynch himself does a great job as does virtually every player in this film. It's a small world they live in but is populated like a neighborhood in LA or New York.

Well-directed, well-shot and enough of a story for me, I highly recommend it if watching a guy wander around for 90 minutes is your bag. It sure was mine.

This does sound good, Patti - thanks.

I will definitely watch it. I loved him in REPO MAN.

Jackie was a big fan of Moondoggie.

Should walk over and see it at the Main before it disappears. Always been a big Harry Dean Stanton fan. Repo Man, Paris Texas, many smaller roles.

Steve-we really do need to meet up sometime. Maybe coffee at that place across from the Main. Beans and Leaf. Patti

Patti-that would be about a 5 minute walk for me. I met you once at a signing by Megan at the Borders in Birmingham. I'm easily recognizable-Old tall skinny bald white dude who still dresses like he's 22.

Well, let's do it next week. What's a good day for you and time? How about Tuesday afternoon? About two? Or My email is aa2579@wayne.edu

Thanks for this, Patti. I'm sure to see it now when it comes to my neighborhood.

I am a HDS fan. He knew his limits and worked within them wonderfully. Not a wide range, but he dug deeper and deeper in his material.

Yes, he did. Glad he went out on this one.

I've always found him interesting in his roles

Incredible to think that James Darren is only 10 years younger than Harry Dean Stanton.